Because the world needs more me.

I think it's time the world learned more about me and how much I love bread. I do crave other foods, though. When I am on the treadmill, in the mornings, I always get a very strong craving for some food or another. I want it so much, I can literally taste it in my mind - like I am imagining the smell of it or something. Sometimes it's Oreo cookies. Often it's bagels. Once it was that white paste that kids used to use in school with the twist off cap with the spreader thing in it. I never ate paste as a kid, although I did lots of other things that in the end, did not make me super popular. But still, while on the treadmill the other day, I wanted paste and I wanted it bad.

I worked at national park one summer, a historical fort from the 1830's where I had to dress up in period costume and sell bread to tourists. It was an interesting job, in hindsight. Hired by a volunteer association, we were paid a fraction that the government employees were paid. But I didn't speak french, so I couldn't get the better paying gig (stay in school kids). I spent half the day at the park in a long skirt and bonnet, but the first part of the day I worked at a bakery making the bread that was for sale. I used a mega huge Hobart mixer and a 200 loaf capacity rotating oven that scared the crap out of me. 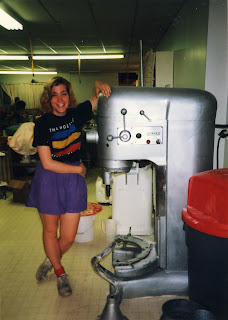 I gained 15 pounds that summer.

I also love muffins and cold cereal. But that might have to wait for another day.
Posted by Elpoo at 17:27