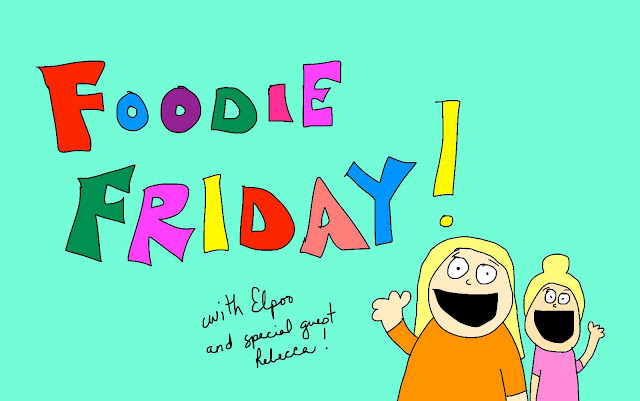 My brother in law is visiting us this week. He is a nice young man. He is very funny. He works in Abu Dhabi. He is young enough to be my son and I treat him accordingly, constantly pushing food at him, asking if he's warm enough and telling him to turn on a light when he's reading for pity's sake.

He has a delightful wife who I am proud to call sister-in-law. Her name is Rebecca. 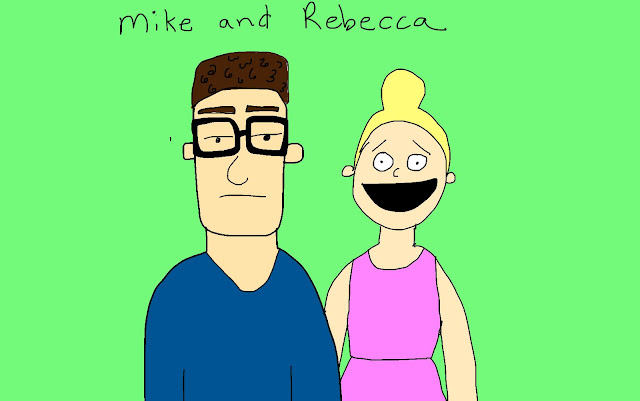 Rebecca is full of lots of positive energy. She is tiny. She can fit in my pocket. When she walks she makes little fairy noises that go ping, doot, tinkle. That's how cute she is.

She has an identical twin sister so I imagine when they walk together it's like wind chimes and tiny New Year's horns.

When I walk I make old lady sounds. 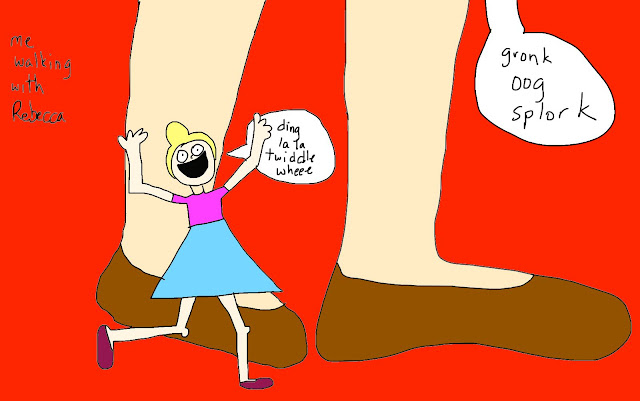 Rebecca is a pastry chef. She makes full on wedding cakes and Taj Mahals out of spun sugar and stuff. So I was very excited when she agreed to help me with trying out the new vegan miracle ingredient "aquafaba" in making vegan macaron.

Aquafaba just means bean water, but when you say it in Italian, it sounds more like a food and not like something for the drain.

I tried making them before on my own, and while the results were tasty (if a little too sweet for even me), aesthetically ... well, let's just say I wouldn't have shown them to Ryan. 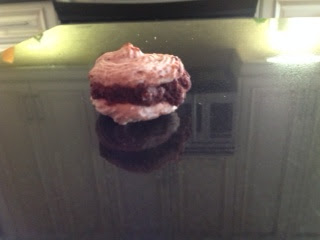 I got the original recipe from this nice lady, but for my second attempt, I just riffed off that recipe and made lemon macaron that were very lovely indeed.

Rebecca was impressed that the chickpea brine whipped up so much like egg whites. 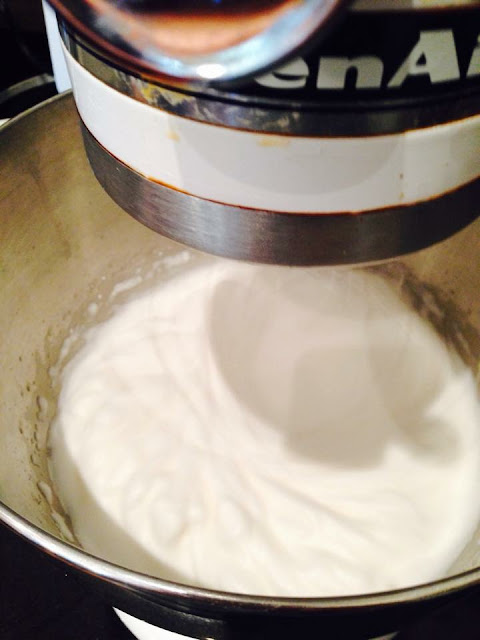 This was her face when that happened. 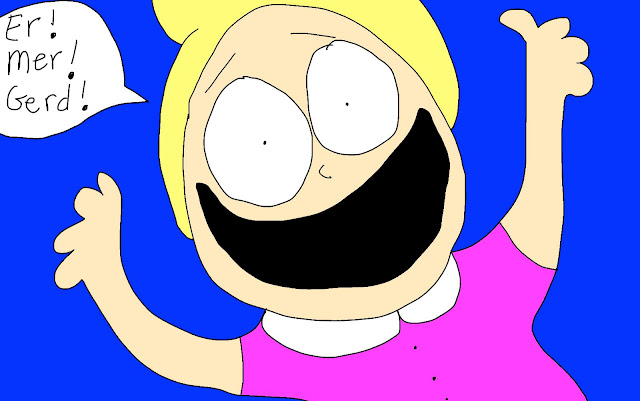 Then we carefully folded in the dry ingredients 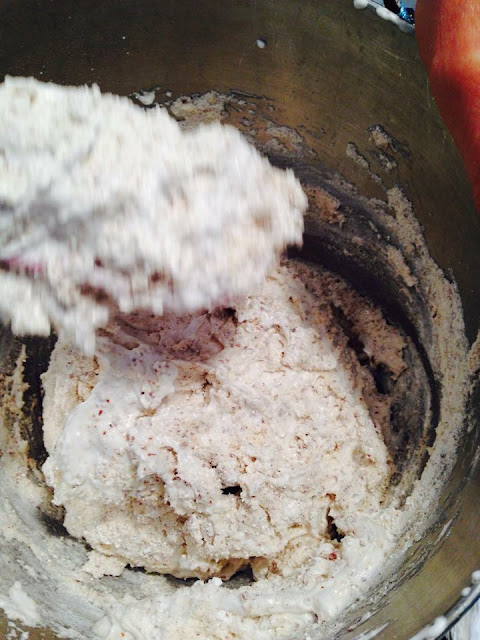 She tried to teach me how to pipe the macaron batter within little circles she had stencilled onto the parchment paper. 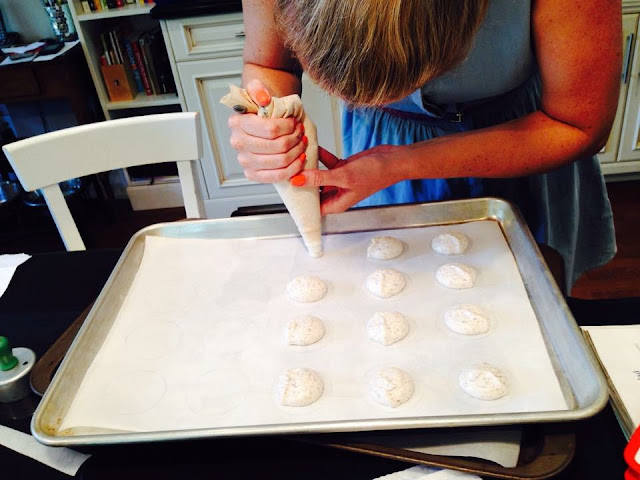 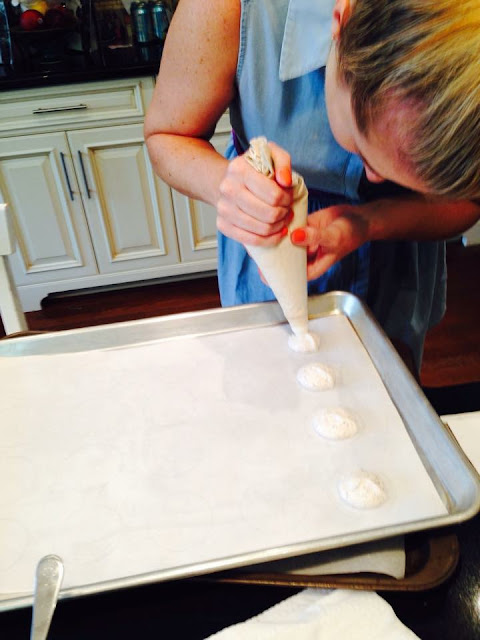 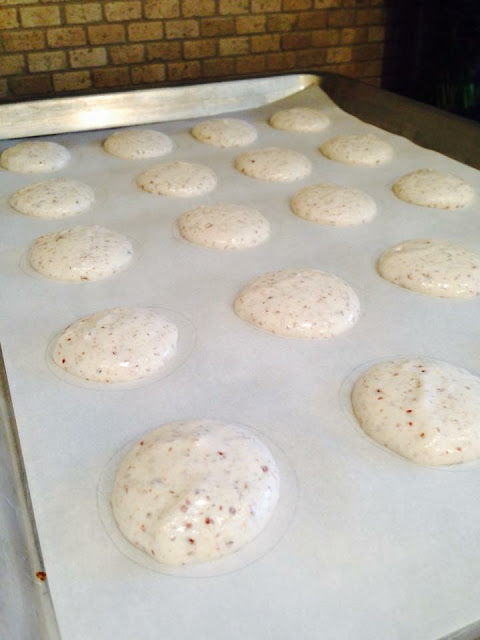 The results, well, they were magical. They even had, what Rebecca referred to as "a foot" which is the little ledge that is formed on the bottom of the cookie while it is baking. And Rebecca says that she can not tell the difference between the deliciousness of a vegan macaron and a regular old macaron.

I was impressed, too, with how well they turned out. 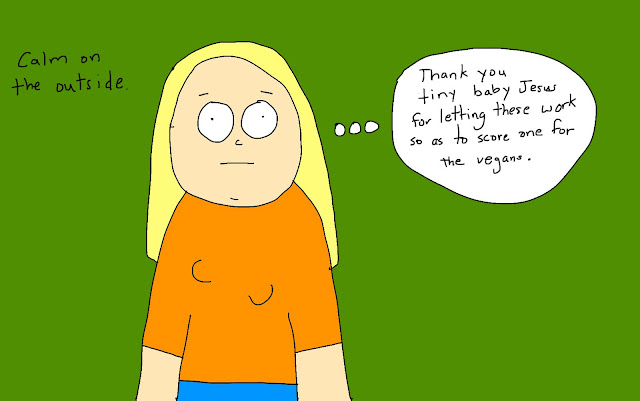 Go ahead, be amazed. 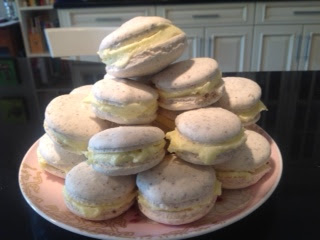 Lemon Macaron (adapted from a recipe from here)


liquid from one can of chickpeas (540 ml or 19 fl oz)
1.25 C ground almonds (I got mine at Bulk Barn)
1.5 C icing sugar (Redpath is vegan)
.5 C granulated sugar
1 Tablespoon lemon extract (or less if you want a more subtle taste)


line baking sheets with parchment paper. You can trace circles onto on side of the paper to act as a piping guide. Just make sure to have the side you draw on facing down.

1. Drain chickpeas, saving brine in a small saucepan. Use chickpeas for another recipe. You can even freeze them if you're not feeling like hummus right now.

2. Bring chickpea brine to a boil and simmer until liquid has reduced to about 1/3 Cup. remove from heat and allow to cool to room temperature.

3. Combine your almond flour and icing sugar. I sifted my icing sugar to get rid of any lumps. Set aside.

4. When chickpea brine is cooled, put in the bowl of a mixer and mix with whip attachment on high for about 5 minutes, until stiff peaks form. Then, gradually add the granulated sugar and whip on high for another 2 minutes. Fold in lemon extract.

5. Carefully fold in almond and sugar mixture. When just combined, you have to do 15-20 fold overs where you press a spatula into the mixture, against the side of the bowl and then scrape and fold it over onto itself. I did 17 turns. You can't do it too many times or the batter will collapse.

5. Fill goop into pastry bag fitted with wide round tip. We just used the open end of the pastry bag because I didn't have the proper sized tip. Pipe into small, equal sized circles onto prepared baking sheets.

6. Hold pan in one hand, and with the other, knock on the bottom of the pan under the piped circles, tilting the pan back and forth while you do so. We did this for a solid minute. This is what Rebecca says to do. The original recipe I used says to  hold the pan at chest height and drop the pan onto a counter two or three times. The tilt and knock version feels more pro. And you want to be a pro, right?

8. Ice the underside of one cookie with a bit of lemon frosting and sandwich with another, similar shaped cookie. Rebecca's were all the same size. Mine were more, you know, um, whimsical.

2 or 3 T vegan margarine (I just did, you know, whatever)
1 - 1.5  C icing sugar.
finely grated rind of one lemon
juice from one half of a lemon
yellow food colouring, if desired.

Whip together until combined. If necessary, thin with a few teaspoons of non-dairy milk, until you have the desired consistency.