I have a complicated relationship with Vector cereal. 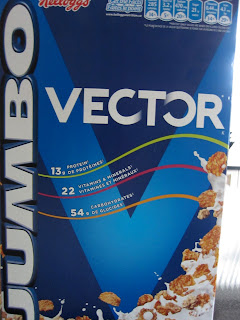 Vector cereal (by Kelloggs) is marketed as a meal replacement cereal and their TV ads show lots of athletes doing super energetic things, things they are able to do because they have replaced their meals with Vector. They run faster, bike faster, jump higher. They are so fast they don’t have time to make a sandwich, they have to have Vector, instead.  I guess they are trying to tell us that if we replace meals with Vector, we, too, can be super athletes who look all intense and hardcore and sweat in a sexy manner.
I’ve tried this and I can tell you it doesn’t work.
Now, I love Vector, let me be clear. I love it so much, it’s wrong. I love it so much that I will eat Vector crumbs off of the counter top after Brian has poured himself a bowl. Sometimes I discover too late that the crumbs are actually dried up cat food. All for Vector. It’s a dangerous love. If I was not already married, I’d marry Vector and then divorce Vector because Vector and I just can’t live together.

Yet we can’t live apart.
I can eat more Vector than is scientifically possible.
They say a serving size of Vector is 1.25 cups. Who in hell has 1.25 cups of cereal, only, at a time? Come on.
I’d say 4 cups a serving is probably more accurate. And I can have multiple servings in one sitting. Easy.
It’s got to the point that Brian, my husband (because that’s his name), has to put the Vector on a high up shelf in the kitchen to deter me from depleting all his supply. It’s so close, yet sooo far away. It’s on that shelf taunting me, singing it’s Vector siren call. Waiting. 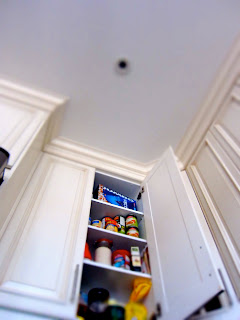 Waiting for me to, I don’t know, get a stool and stand on it so I can reach the Vector. Or get out a spatula and flick it down with a single reach.
Once in a while, I succumb to the lure of the call and get me some Vector (It’s pretty easy Brian). According to Livestrong.com I can burn off one serving of Vector by laying linoleum for 42 minutes. I can do that.  Linoleum can’t be that hard to put down.  Alternatively I can do “theatre work” for 63 minutes. That sounds like fun! And I really want that Vector. I figure I can keep it to one of their serving sizes and enjoy some of that Vector Nectar without losing it.

Well, we all knew how that was going to end.
For now, I’ll just try to keep it together as best I can. I’m hoping, maybe, Jillian Michaels will write a self help book on how to beat the Vector habit. She’ll use her no nonsense, tough love, therapy-speak, and I’ll feel all better.
And then I’ll move on.
To Mini Wheats.
Posted by Elpoo at 10:26