Ryan and I went on a field trip to Michael’s Craft Store last week because Sarah was too terrified to go. She says it’s overwhelming. Like going to IKEA on a Saturday afternoon after taking acid. 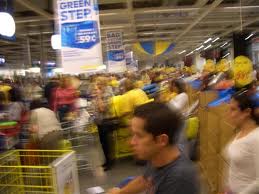 I wonder how she would know what that’s like. She’s had a wild past, I guess.

Anyway, Ryan and I fared just fine and I only got a little sweaty. I got some so much very very needed craft supplies and I also picked up four adorable little ceramic loaf pans that were on mega deep discount. I only regret not getting 12 of the little bastards.

So I made banana bread because I am amazing. I’m going to put ribbons on them and give them to the neighbours.

I used a recipe from the Veganomicon (vegan bible), but made a few twists. The original recipe was posted HERE.   I added mushed up pear and some ginger and allspice. I also forgot to add the .5 C apple sauce the original recipe called for. I know. Idiot. It was the whole point. But I guess the pear helped.

So it’s pretty darned good, must say. Not terribly sweet, so if you like it sweet, pour a bag of sugar over it and maybe some corn syrup.

Mush up the banana and pear really well.
Add the oil, molasses and sugar. Combine.
Sift in the dry ingredients and stir until just combined - it’ll be all lump-tastic.
Plop into loaf pan(s) and bake for about 50 minutes (40 for mini loaf pans). Oven heats differ, so I’d check your bread after 35 minutes or so. Toothpick should come out clean after poking into the centre of the bread. But you know that kind of stuff already because you’re a superstar.

Oh, and Sarah’s not getting any of this banana bread because she wouldn’t take me to Michael’s. I guess we’re even because I told her I wouldn’t got on her eleventy billion mile charity bike ride with her.

What is up with her?

Except when she won’t take me to Michael’s.

And she’ll probably get some banana bread.