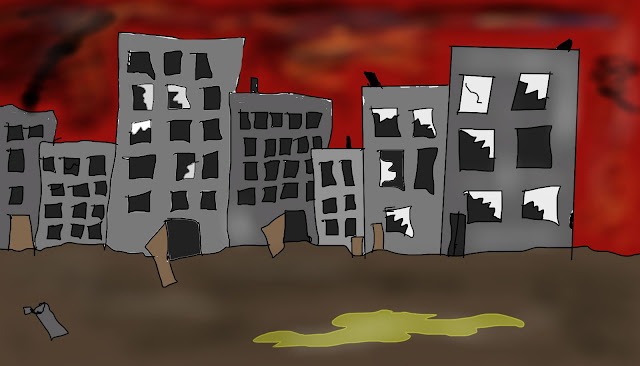 In the event of an apocalypse, I have no useful skills. Therefore I would be one of the first to be eaten by stronger, more resourceful folks.
My main marketable skill, that of being a background singer, would not serve me well in a global post-economic/social collapse society. And I don’t think there will much call for needlepoint pillows when people are scrambling for potable water and tools.
I mean, if you had to choose a survival partner,  who would you choose to fight on with, and who would you make into delicious jerky? 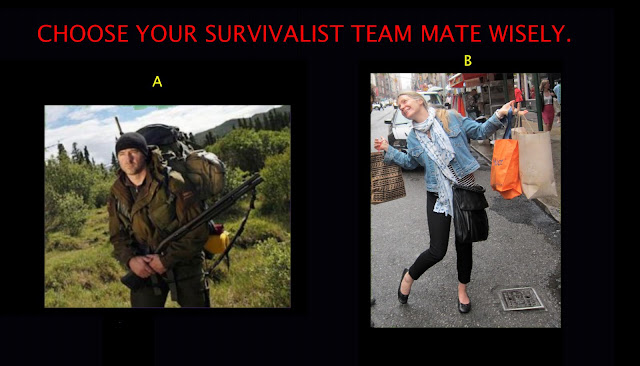 Given the way the world is these days, maybe I should start eating a lot of garlic and rosemary and make myself be the best “Oh-my-God-has-it-come-to-this-well-might-as-well-dig-in-she-looks-pretty-meaty” that I can be. You may thank me in advance.
I am not a good candidate for Survivalist Of The Year. My mother, on the other hand, has been preparing for the End of Days for as long as I can remember. When I was small she took me by the shoulders, looked me square in the eye and said “If the world ends, and everyone else is dead, if you have to chop wood, stand in a barrel because if you miss and cut your leg off, there will be no one to help you”.

She used to make lists on her cigarette package. We’d know if she’d been reading too much post apocalyptic fiction based on the contents of those lists. 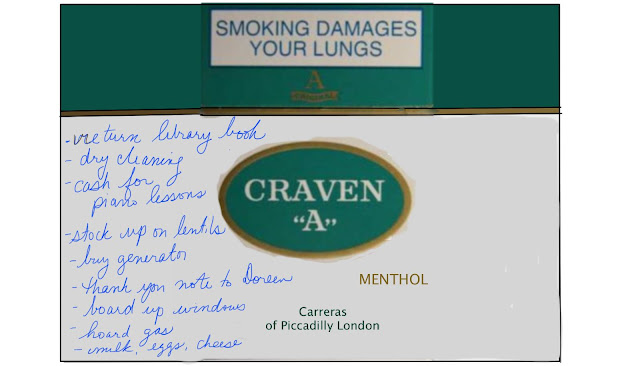 One of her all time favourite books is The Last Canadian by William Heine. 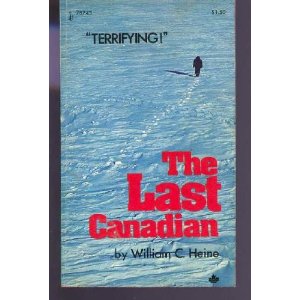 Apparently, it is TERRIFYING.
She can plan for Epic Global Catastrophe, but has a lot of trouble deciding what to have for lunch.  Unless it comes out of a ration pack.

As someone who does not like the thought of camping, hunting or making much of an effort in any way, you can’t imagine how much I dread a world without a familiar social structure, routine and electricity. This is the scenario in which Ted Nugent, his weapons stockpile and his vast army of minions get the last laugh on me. Oddballs, living off of the grid for decades, become leaders. People like me and Perez Hilton, well, we’re not even useful as wild boar bait. 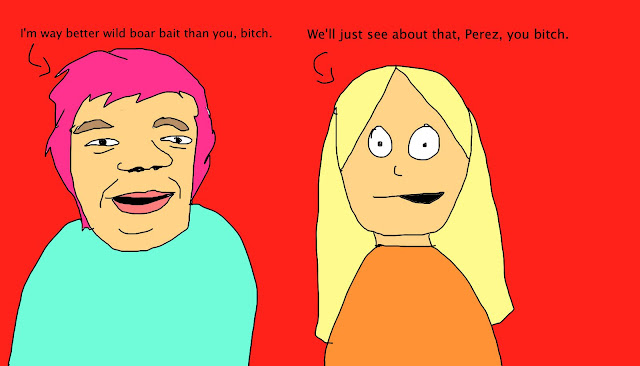 Unlike my mother, I can’t read those Post-Mega Disaster books. I read Atwood’s The Year of The Flood and it haunted me for months (plus, after I read anything by her, I start talking like she writes. Short sentences. Dripping with meaning. Must remember. Feed dogs. The vacuum poised. So much dust).
They freak me out because they are so very possible and I am so very ill-equipped to adapt. I wasn’t in Boy Scouts where you learn to make fire and pitch a tent. I was in Brownies (briefly) where you learn to braid and be jealous.

Approximately 100% of my day is dependent on electricity, fossil fuels, the internet, my good health and capitalism. While much of all those things (except the internet which is infallible and safe for children) needs some work, I hope change will be gradual. It takes time to build up supplies of powdered milk, salt, sugar and antibiotics. And no, Vector wouldn’t make the cut. Takes up too much space and would only add to my anxiety about being fat in a post apocalyptic society. 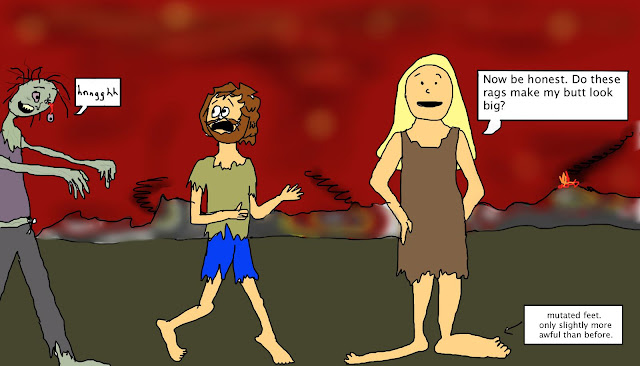 I know I probably shouldn’t be too worried, but I think a little bit of emergency preparedness is a good idea: flashlight and extra batteries, a bit of bottled water, purification tablets, dog chews to shut them the hell up so as not to draw the attention of the zombie hoards. And maybe just one box of Vector. You never know, right?

Email ThisBlogThis!Share to TwitterShare to FacebookShare to Pinterest
Labels: Apocalypse, I am addicted to fossil fuels, not a survivalist, Survivalist, Zombie apocalypse