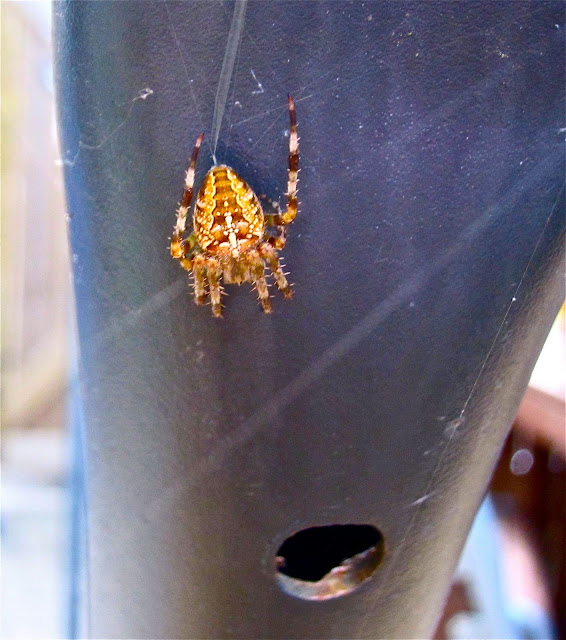 During certain times of the year we get a lot of spiders in our bedroom for some reason. Probably from the insulation filled crawl space in the ceiling. Spiders love insulation. It’s like ice cream and flies mixed together for them. Anyway, I hate to be a cliche, but I don’t care much for spiders even after reading, and loving and believing to be totally possible, Charlotte’s Web. I make Brian flush every one.

I don’t care if he flushes them or squishes them, but he figures with flushing they have at least a whisper of a chance of surviving, so it’s less like arachnicide to him. He’s sentimental that way, I guess.
Every spider is named Jimmy for some reason. I don’t even tell Brian that there’s a spider, I tell him there’s a Jimmy on the wall and he has to deal with it. He is totally my protector. Totally.

As mentioned in a previous blog, I am afraid of vomiting in public. Or of having a brain aneurysm at any time. I worry I’ll be too warm sometimes.
I am also not fond of boats. Having had sea sickness on a couple of occasions and having been in motor boats in a huge lake when we’ve run out of gas and an offshore breeze starts blowing and I have to pee really bad but don’t know the people with the boat well enough to say, hey can I just take a dip and deal with this... well, not interested in boats. I told Brian if he ever wants to have an affair, or needs a place to hide the bodies of the people he kills, he should just get a boat, because there’s no way in hell I’d go on it.
When I was little, my idea of a that hell was a room off of our furnace room in the basement. We had an old house, built by my great grandfather, and it had a coal room where they used to keep the, duh, coal for the furnace. We didn’t use it for anything except storing things including some pickles that my mom made and forgot about for 14 years. It was probably the entry point of these black beetles that plagued our house for years. We called them Visitor Beetles because they only ever came out in droves when we had visitors over.

I was so scared of the coal room my mom could put my Christmas presents in there, unwrapped, and not have to worry one bit about me poking my nose in, even for a peek. My dad used to to say that he had a sister (he didn’t) named Druscilla, who lived in the coal room. He’d say “I once had a sister, Druscilla. Whose face would leave pus on the pilla”.
Could have been true.

My pal Charley and I are scared of what would happen if chocolate and cheese were paired together. We don’t know why. it just makes us feel uncomfortable.
I am afraid of panel vans.
I am afraid of getting lost. Once, when I was 6 I was in BC with my family and we were walking on a beach. I thought it would be a cool in a tv kind of way, to get lost on a beach. So I wandered around a corner and POOF, I was lost.  I quite regretted it after the fact, even though I knew somewhere in my pea sized brain that I wasn’t really lost.   I cried. I got attention. I need attention. A lot of attention. 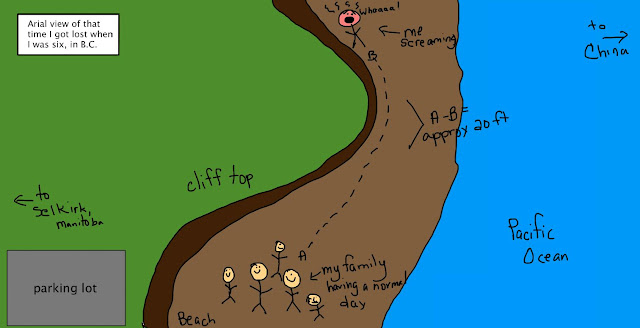 My mother will be angered that I got lost on purpose. Just so you know, mom, the time I got lost at the garage across the street, that was not on purpose, but asI have no memory of it, who knows. I’m a devious little bitch.
I got lost in Shanghai, in what I figured must have been a residential/slum area. Everything was grey/green and no one looked friendly to me. I was not blending in. Someone was getting their hair cut on the street. Someone else was doing their dishes in a sink outside their front door. I eventually found my way back to the hotel and we went out for dinner where we were offered things that looked like eyeballs.

I am afraid of accidentally eating an eyeball. 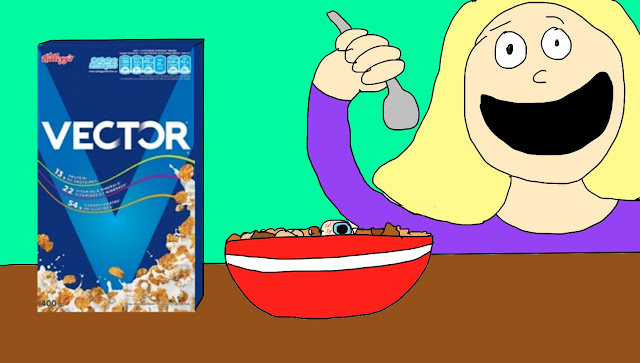 Or even eating one on purpose. Because then I’d know I was for sure crazy. And I fear being crazy. I  mean, more crazy.
There is that super annoying saying that you should do one thing everyday that scares you. I suppose the point is that you become more confident and experience life more fully. I suppose that this refers to things like sky diving, taking that pilgrimage to India, or wearing mixed plaids together in one outfit.
In that case I am totally totally afraid of binging on Vector.
Guess I’d better get a bowl and just do it, to conquer that fear, right?
I fear what Brian will do if he ever finds out exactly how much his Vector I eat in a day. He can be very stabby.

Email ThisBlogThis!Share to TwitterShare to FacebookShare to Pinterest
Labels: fear of boats, fear of eating an eyeball, fear of getting lost, fear of sea slugs, fear of spiders, fear of the coal room