You know what is endlessly fascinating?
I mean, other than, just basically, me?
Well, what I eat on a daily basis is, to be honest, pretty spellbinding. Are you ready to be spellbound? And if not spellbound, at least you’ll feel sorry for me.
I have been breaking my diet for 35 years.
They say that a good habit to have when one is trying to lose weight, is to write down what you eat. I have been doing that for over two years now. I promised myself that no matter what it was, how much and how shameful, I would commit to a storage medium an account of every thing I ate. I also kept track of my exercise and a computer program told me if I was a good person or a bad person based on math. And science.
Mostly, I am a very bad person.
In  two years, between August 2009 and August 2011,  I consumed at least:
60 pounds of oatmeal


Other stuff, too.
While I believe that being aware of what I consume is, ultimately, a good practice, I do find that it is inextricably linked to how good I feel about myself in a given day and therefore, NOT a good thing. So what’s a girl to think?
At the very least it is interesting to see how my eating habits change during times of stress, like when I am on the road. Holy crap, you’ve no idea the amount of garbage I consume. Or when the dogs are barking like mad and otherwise making me crazy, my first thought it, “Hey wouldn’t 3 bowls of Vector make this all better?”. 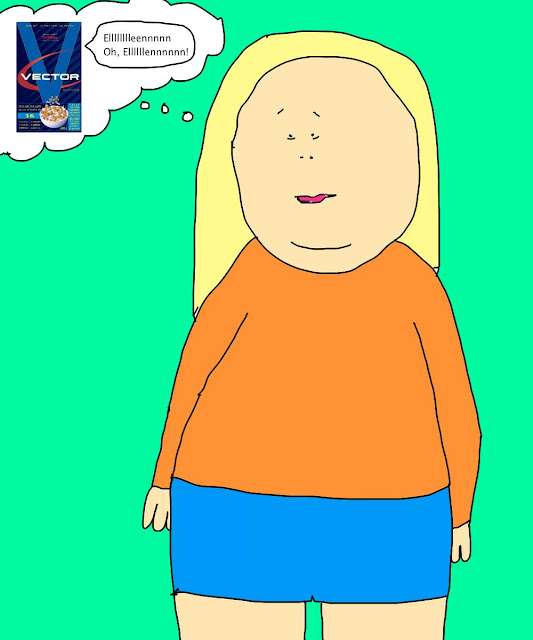 I can also see that times when I have lost weight, I have had a 700 calorie deficit per day. This sucks in such a major way. My GP told me “Sometimes you just have to be hungry if you want to lose weight”. Same as Kristen Bauer, who plays my beloved Pam on True Blood. She said,  “The other day I realized as long as I’m in this business, I’m going to be hungry”. I’m not an actor, but I have the insecurities of one.
The problem is, I hate being even a little hungry. I like feeling like I’ve just eaten an entire loaf of bread, and you can guess the best way to accomplish that feeling. Maybe by eating at least 85 loaves of dark rye bread over the course of 2 years? Might be a plan.


At least I know I am not alone in this psychotic struggle to be something close to the cultural ideal. I want people to find me to be attractive AND to take me seriously. Like these women: 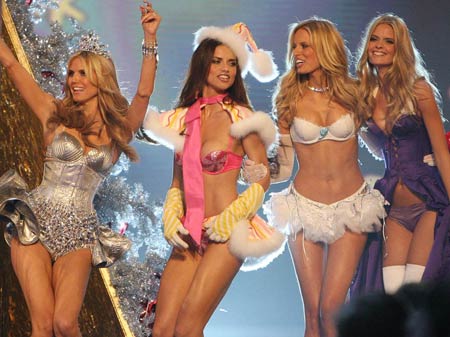 Sometimes, I wonder what would happen if I just let it go (Don’t worry, Brian. Not going to happen). What would happen if I ate an entire bag of President’s Choice Decadent Chocolate Chip cookies every day for a year? If I ate that stadium full of risotto? That canyon filled with croissants?
There’s a woman out there who is doing just this. Her goal is to become the world’s heaviest woman

She claims she can do this while remaining healthy. This is interesting on so many levels, but if I were her, I would not be too interested in being a living experiment for obesity research.

Check out her daily diet: 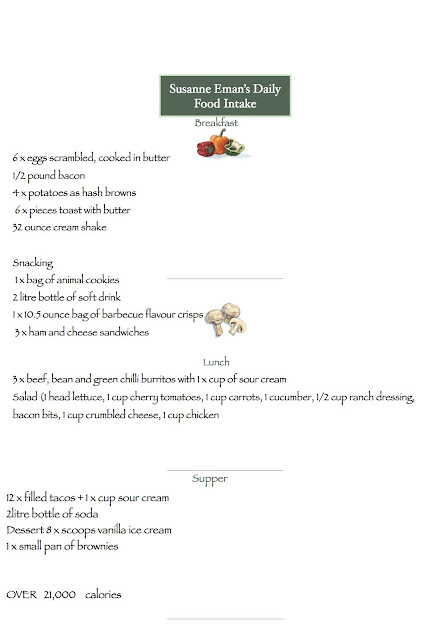 Here’s her explanation of her crazy quest.


(I do not endorse the porno music in the preceding clip)
This will not screw her kids up one little bit. I have to wonder what the local child welfare services have to say about this situation. The kids are cared for and everyone seems to be loving and supportive, but basically, the mother is slowly killing herself. She’s had psych evaluations that determine she’s not a crazy pants. Who is going to be blamed after she dies (because this is what happens to people who are 1600 pounds)? Will they pin it on the over-worked, resource stretched social worker? The family physician? Heads will roll, that much is certain.
Eman says that outside of being the world’s fattest woman, her goal is to break down the stigma of overweight and that people need to “accept others for who they are”.
I seriously can not understand how making herself into a circus side show and most likely orphaning her children is a good way to create positive awareness for size acceptance. There’s gotta be something in the DSM-IV about this (shut up about the DSM-IV). If she doesn’t make it to being the world’s fattest woman, she might be able to claim to be the world’s slowest suicide. Depending.
Obviously, Eman is an extreme. I don’t want to eat like her, even if I never gained a pound. I like doing other things besides eating. I just can’t think of them right now.


She is right that we need to be more flexible in our definitions of beauty; that there is room for all shapes and sizes in our list of acceptable silhouettes. People need to know that they are perfect the way they are.
Except me. I need to look like Gisele Bundchen. Pass the chocolate chip cookies, please.
Posted by Elpoo at 14:49