One Year of Inappropriate Personal Disclosure. And a Foodie Friday to boot. 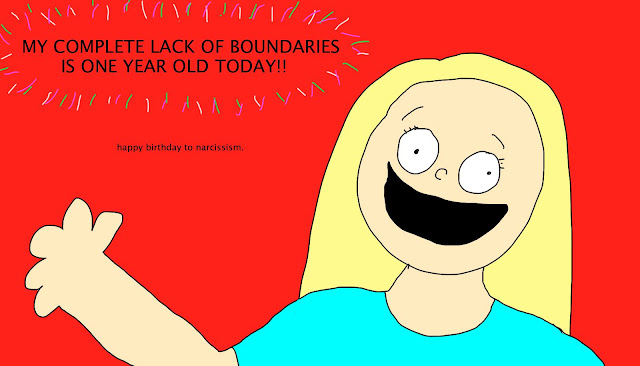 Has it really been a whole year that I’ve been spilling my guts to you about the most intimate aspects of my life? You now know as much about me as my husband, except for that thing that makes me say “Um, I don’t think so”.
I want to thank you, really, for reading this stuff. I get such a kick out of humiliating my mother and it’s great that I have a receptive audience. It also keeps me off the streets.
Nah, we all know it’s a constant state of heightened anxiety that keeps me off the streets.
But you get what I mean.
So, it being one year anniversary of My Complete Lack of Boundaries, and also Foodie Friday, I thought I’d make a it a birthday cake.
This is no ordinary cake. This cake was served at the wedding of the Rev. Chancellor and Mary Teeter, my great-grandparents, on July 6, 1885. I have never made it before. It is labour intensive.
My Great Grandmother, Mary Zimmerman, was not a real looker, but she was a fine lady.

When she consented to marry a Methodist minister she let her pierced ears grow in, as it was just NOT ON for a minister’s wife to have pierced ears.

She had four children and moved house every couple of years to new little towns where Great Grand-pappy Chancellor would take up preaching to unpierced Methodist congregations across Canada.

So here’s the cake. My mom says that preparing the coconut is a lof of work but that it’s so pretty and tasty that it’s worth the effort. Jury’s out on that one.

MARY TEETER’S CHOCOLATE LAYER CAKE WITH COCONUT ICING
Makes 2 - 8” layers. One and a half times the recipe makes 3 layers.
Preheat oven to 325. Have racks in centre of oven with enough room on the lower rack to allow for cake to rise if you need to use two racks.
CAKE:
Melt together and cool:
1.5 squares unsweetened baking chocolate
1 heaping Tablespoon butter
Add:
1 C white sugar
1 egg
1 tsp baking powder
1/2 teaspoon salt
1 C milk
1.5 C flour
1 scant teaspoon baking soda
Beat all ingredients well for 5 minutes
Stir in 1 teaspoon vanilla
Bake in cake pans (I lightly buttered and powdered with unsweetened cocoa powder for easier removal) for 25 minutes. Remove pans and cool completely.
COCONUT:
Drain a fresh coconut, being sure that the juice is not sour (if the juice is sour than the coconut is no good).


Hammer lightly around the middle of the coconut intil it breaks in half.

This takes a little time, it’s not instant, just so as you know.

With a large, sharp-edged spoon, and using almost the whole nut, scoop out round flakes of coconut. Avoid getting any of the husk in the white flakes. Put the flakes on paper towels to dry the oil. Use empty coconut shells to make horsey clop-clop sounds.


This can be prepared ahead, and stored for several days in a plastic bag in the fridge, along with the paper towels to keep absorbing the oil.
SEVEN-MINUTE FROSTING:
In top of a double boiler, place:
2 egg whites
1/4 C light corn syrup
1/4 teaspoon creat of tartar
1/3 C boiling water
1 C white sugar
pinch salt
Beat over boiling water with hand mixer for 5-7 minutes until icing retains a clean cut with a knife. Fold in 1 teaspoon vanilla. This provides enough icing for 2 or 3 layers of a 8” layer cake.

Some of the coconut flakes can be mixed together with a portion of the icing to make a filling between layers. Ice cake with frosting and place coconut flakes all over top and sides, as much as it will hold.


Ok, so the coconut part of this cake, for me, was a disaster - you can see that I didn’t put the coconut on the cake. I didn’t have my Grandma Reid’s magic sharp coconut scraping spoon, so I tried using a knife and a vegetable peeler, but I just ended up with thick grey slabs of coconut dotted with chunks of coconut husk. So, today’s version is sans coconut. Next time I make this, and I will make this again because Brian tells me - “Cake. Cake is good”, I will buy unsweetened flaked coconut from a health food store where the flakes might be bigger and there might be fewer sulphites used.

So, once again, thanks for reading my blog. I hope I can keep it up for another year. I might run out of ideas and start repeating myself, which is ok, because I'm old and forgetful.