I saw a crazy lady wearing a bizarre outfit down on the Boardwalk the other day. Clutching a Barbie. A red head Barbie. Don’t see those very often.  Red headed Barbies. Not crazy ladies. I see those a lot. In the park. On the TTC. In my bathroom mirror.

Anyway, so... Barbies. I was totally in to Barbies as a kid. I liked dressing them in glamourous outfits. Normal girls would dress them in ball gowns and have them go to parties or dances or weddings. I was more in to Barbie just hanging around in all her finery. Kind of like all the women on The Young And The Restless (most sequins per capita on day time TV).

This was probably a good thing. Later, when I grew up and didn’t have 36-18-33 measurements, life wasn’t all about shopping and parties, so I wasn’t all that disappointed. When I was a kid I knew only vaguely that somewhere some people lived shiny lives of the rich and famous - there was no Real Housewives of New Jersey for me to compare myself to. Real Housewives of Selkirk, Manitoba spent their time hanging out laundry, going to Bingo and making Kraft-inspired recipes for church bake sales. My TV role models were on Sesame Street and Mr. Dress-up. Most glamourous one was Big Bird. And he was kind of stupid. Not kind of. So Barbie’s life for me, was only a sexier looking facsimile of lower middle class life. 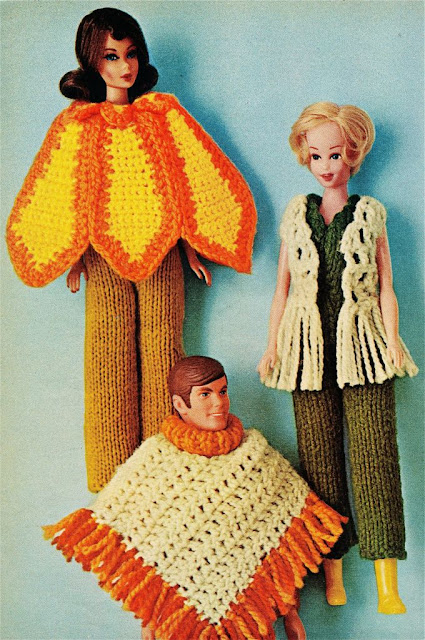 Because I wasn’t expecting grown up life to be all convertibles and weekends at the Hamptons (I expect this now, however), I suppose I have not been too disappointed by the realities of every day life. If Barbie had to pay property taxes, be kept on hold by the cable company and pick up dog poop pretty much non-stop, then I would have been primed and ready for the real world. I have had to make some adjustments, to be sure. Maybe the Barbie playing children of today need to be fed more specific scripts in order to ensure they are not devastated by the utter banality of adult life. 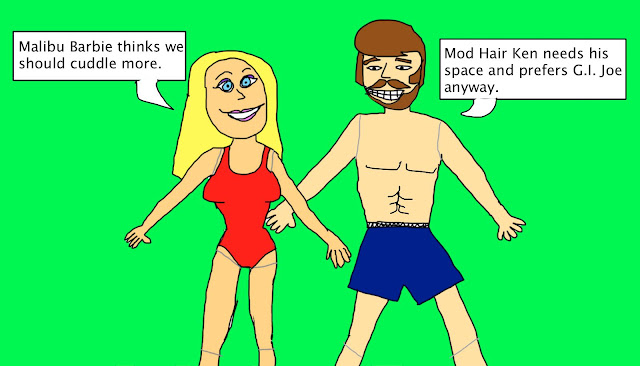 There should be a Student Debt Barbie. Or a Ken who lives in a basement apartment with his alcoholic father. Or Cutting Skipper. I imagine if I did a Google search, I’d find all that somewhere. The world is too big sometimes. I had Mod Hair Ken when I was a kid.


He had a stick on beard, moustache, and sideburns. His hair was kind of rumpled looking. Ken played a very low-on-the-list supporting role in my Barbie games. Mod Hair Ken always lived on the periphery of Barbie’s life. Maybe he just wasn’t that in to her. I don't recall Mattel coming out with accessories for Ken like,  "Ken's Garage Workshop" or "Ken's private cell phone" or "Ken's Hockey Pool Score Card" or "Ken's Beer Fridge". No. Barbie was Ken's "beard", even when he had a stick on one. Yet another reason Barbie and Ken never had sex. I  mean other than not having genitals.

I still have this urge to play Barbies some times. It must be great to be the Kardashian’s Manager or whatever.  It would be like playing with a real live doll.  Make Beautiful People do whatever you want. “Hey there, Kim. You’re going to a party and then you’re going to get married. And then you’re going to another party and a fashion party and then to the castle. Then you’re going to go on Ken’s boat and wear this outfit. You have a dog for 3 minutes until you lose it under the couch. You need more stuff sold seperately. You are not allowed to change your facial expression”. Sadly, in this real-life Barbie doll, I think she is responsible for her own actions. Having a rubber brain might actually explain the Kardashians to me.


Then there are the people who want to look like Barbie. This, to me, is just as creepy as that lady who is turning herself into a cat. Maybe more so.

But I digress.
I do crave the make believe world sometimes. What would it look like, you ask? 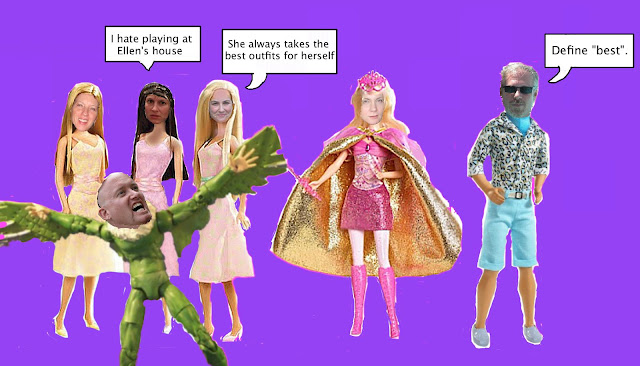