Today is my mother’s birthday. She is 75. As you may recall from my Mother’s Day tribute, I think quite highly of the gal She is a great mom and friend, lets me win at Gin Rummy, and when I come to visit, she makes sure the fridge and cupboards are stocked with whatever weird food fad item I was into during the last visit, but have since given up. "Oh thanks, mom, but I’m not doing the almond butter and flax seed oil diet any more". She probably spends half of her monthly pension on feeding me during my visits. Then she’ll stand in front of the fridge and list off all the snack foods in the fridge. Because am 45 and incapable of identifying a bowl of grapes or pack of processed cheese slices.

My mother, like most mothers, has had to endure her children, as well as provide for them and care for them. Although my brother and I were generally pretty good kids and didn’t cause trouble, on occasion we did mortify her.

When I was a babe in arms, my mom took my brother and I to Winnipeg on the Selkirk Bus. The bus was packed. My brother, totally impressed with my mother’s natural ability to feed a child gleefully reported to the entire bus in his loud, clear voice: 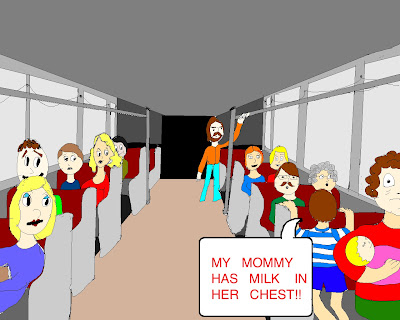 My mom and dad were active members of The United Church in our town. Selkirk is a fine town, but back then it was not exactly an extravaganza of diversity. There was one black family in our church – they may have been one of the only families of colour in Selkirk. I was 3 years old. Three! I walked up to the male head of that Household of Colour and said: 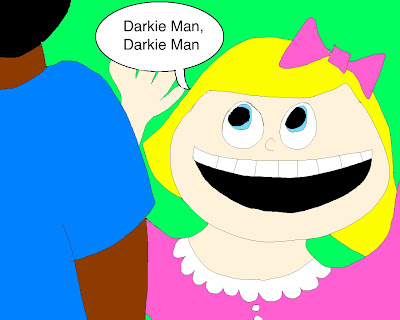 My mother’s jaw hit the floor (never, ever would my folks have said those words, so she had NO idea where I would have heard this). The man just patted my head.
There is a special place in Hell reserved for my three-year-old self.

When I was, oh, probably six or seven, a friend of my mother’s was telling my mother she was worried about her 18 year old daughter who was going traveling on her own. I was in ear shot, so she said "I’m worried that she’ll get r-a-p-e-d", spelling out the sensitive word. The next time she was over I asked her if her daughter got rapped. I’ve never been a good speller. Or particularily tactful.

When my mom was taking swimming lessons, her teacher told her to demonstrate a dive. After she did, the teacher said, "Ok, Mickey has shown how NOT to do a dive". 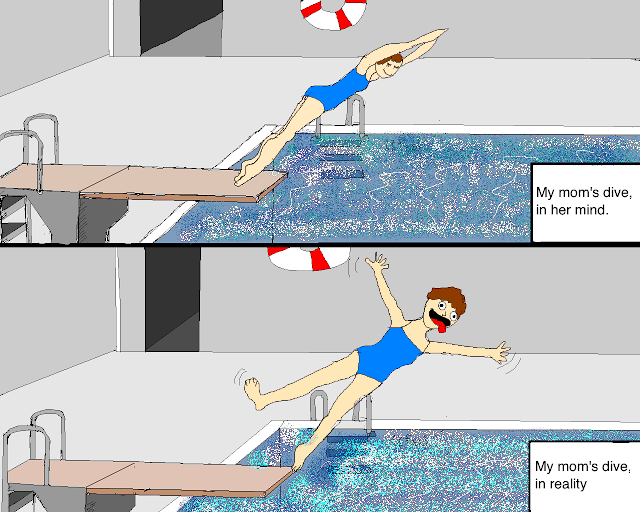 Oh I guess that’s not about how my brother or I embarrassed her. She did that one on her own Too bad. Ha ha, Mom.


Some friends had just had a baby. When mom told me about the good news I was more interested in the action that preceeded the glorious birth. 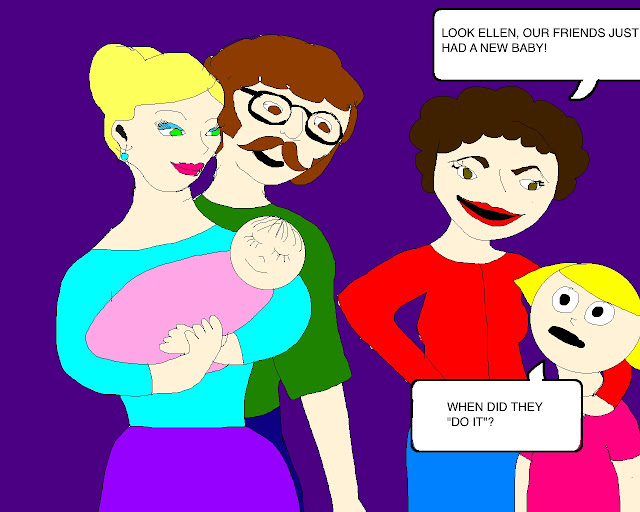 Some facts about my mom:

She is the only person I know who has been known to take 2 hours to eat an entire orange. I would see her when I was a little kid, lying on her tummy in her room, propped up on her elbow reading a book, nibbling away an orange. And then the peel. She did the same thing with apples, but left the seeds and the stems.

She had her tonsils out when she was 10. One grew back.

She injured her pinky finger as a child and ever since it has clicked when she moves it.

She used to paint her fingernails with this vile tasting stuff to break her nailbiting habit. But then she’d just eat through the awful stuff anyway. And she says that yogurt is "tooooo sour".

She can say the word "kitty" 828 times in a minute. It looks like this: 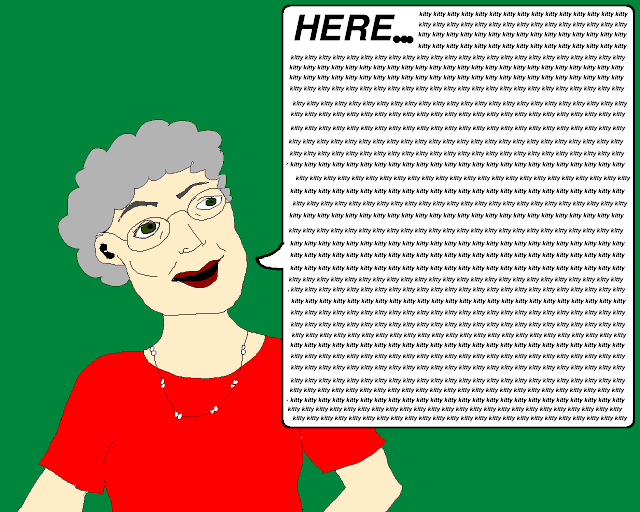 And it sounds something like this, only it goes on way longer:

Her lipstick colour for about 50 years was Revlon "Wine With Everything".

When I was in High School the only boy she ever thought I should date was the most obviously gay boy I’d ever met or have ever known, atually. She still doesn’t believe it. Why don’t you ask out the So and So Boy. He’s so handsome."

On a long car trip, when I started crying because she gave the dog a 1/2 Gravol to let it sleep for most of the trip, she gave the other half to me. She said it was the best road trip ever.

She will plan her vacations around her hairdresser’s schedule.

She will straight-up murder you for Bridge Mixture. 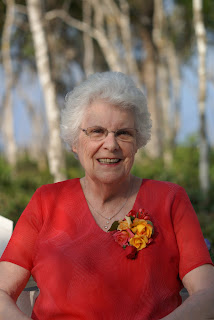