Times Sure Have Changed.

Things sure aren’t like they used to be.
As I settle more comfortably into my well upholstered middle age, I find that some people tend to  long for days yore, simpler times, times we wouldn’t have worried about how to spell Gaddafi (Quaphiy, Giddaffy, G’Dayfee), or feel shamed that we’d thrown empty toilet paper rolls into the garbage instead of the recycling. Playground structures were made of unrelenting metal, not plastic. The Conservative Party was not the Bastion of Evil. They were actually a reasonable option long ago, kids! Little girls’ underwear had ladybugs on them, not thongs with “Hottie” emblazoned with rhinestones. A good day was spent at Patricia Beach with chips and pop, not with virtual warrior zombies or on meth. Allowances were small, microwave ovens were big and Phil Collins was still in Genesis and wasn’t crying all the time. 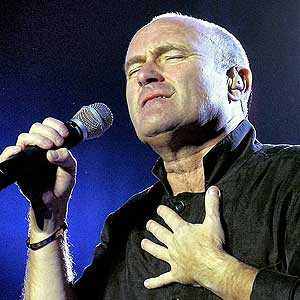 Not everything about those days was golden, though. I’m not pining for the days before email, ATMs, multiple flavours of toothpaste and vanity sizing. No. Today is better, I think.
Like, for example, my belly button used to smell funny. It doesn’t anymore. I don’t bathe any more or less than I used to in my 20s, but I no longer have a navel that smells like a J-Cloth. Where did that stinky lint go? I sure don’t miss that.
Nowadays Hollywood Blockbusters have amazing effects that make you really, really believe that cars from outer space come to life and are going to kill you.
Or that Toby Maguire is a viable sex symbol. 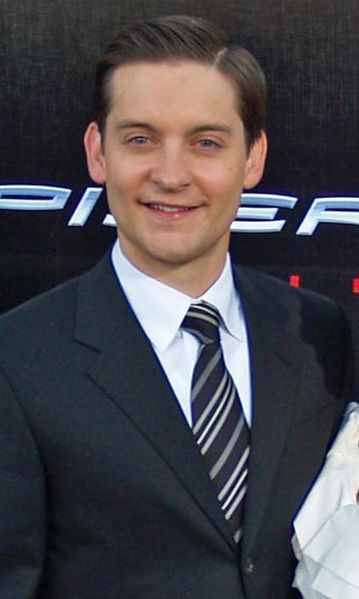 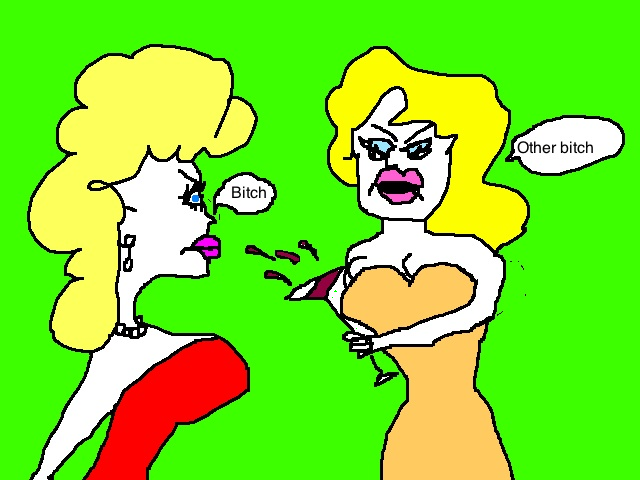 Brian and I watch a lot of TV. Saves us from having conversations about “the future”, or “our relationship” or “who was the woman you were necking with on the street corner yesterday”. Here is a list of just some of the TV shows we watch:
The Mentalist (Patrick Jane is snarky and twinkly)
CSI (will they please retire Langston? Not loving him)
30 Rock (Will walk on hot coals for Tina Fey)
Parks and Rec (Will drink bleach for Amy Poehler)
The Office (We’ll have to see how this plays out)
Modern Family (Best. Show. Ever)
Family Guy (starting to wane for me)
American Dad (I’m basically Francine, but wasn’t a slut in high school)
Nurse Jackie (Wonderbar!)
Burn Notice (Funny, action-y and cool clothes)
In Plain Sight (Witty repartee and good source for insults)
Leverage (Quirky, but not stressful. They always win)
The Misfits (Hi-lar-i-ous. They swear a lot)
Mad Men (Clothes, scotch drinking stances)
Psyche (spot the pineapple)
Monk (no longer running. We loved it)
Covert Affairs (although I want to stab the lead actress. Stop pouting all the time!)
Game of Thrones (affectionately called “Show of Boobies”)
True Blood (getting a bit too porn for me, but I’m kinda hooked)
White Collar (cute. Lead actor is easy on eyes)
Sherlock (Crazy Brits make their series’ 2 episodes at a time with 6 months in between(
Justified (Kentucky Redneck Detectives)
Dexter (killing, all the time)
Rubicon (until they cancelled it. Why? Why? It was so good!)
The Killing (thrillllllling)
Brian hates The Cleveland Show. I hate Californication
I used to live without TV. I read a lot more. I had more friends. When Bettina and I were roommates we didn’t have a TV but had to entertain ourselves in other ways. Other young women were out at bars, meeting men and doing regrettable, but super excellent things.  Bettina and I would stay home and give each other makeovers. 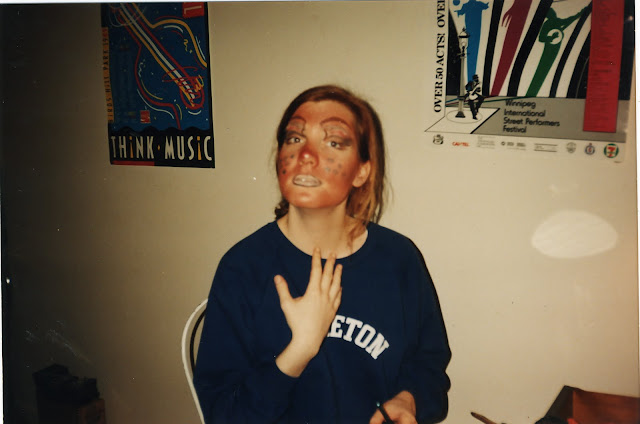 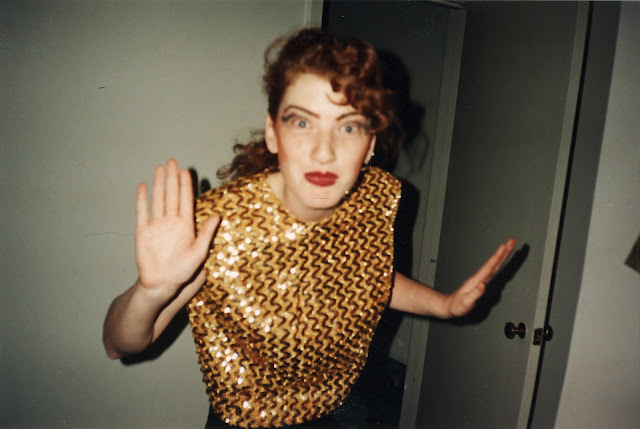 In the afternoons, before I went to work as a bartender and after Bettina had come home from work, we’d have Quiet Time, which consisted of us lying down on our respective futons, having a full pot of tea with chocolate chip cookies from Kaufmann’s grocery store (God, they were amazing) and debriefing the day’s events.
She’d listen to me complain about various men in my life for a couple hours and then I’d ask vaguely how her day went.  Then we’d make a big crock of spaghetti with meat sauce and eat it really fast “before our brains told our stomachs that we’re full”. 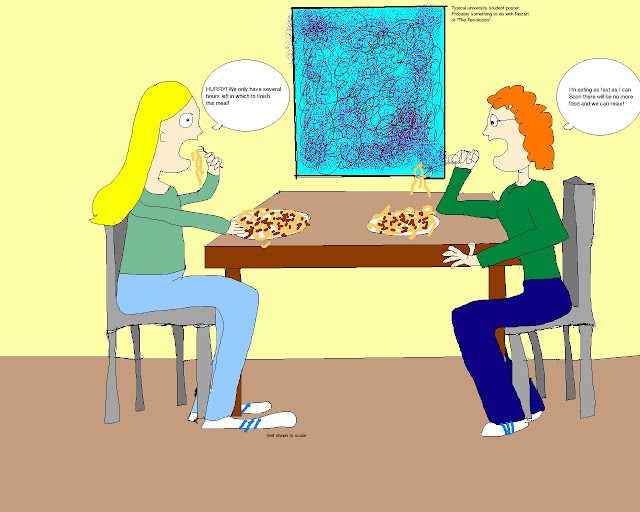 Or we’d entertain ourselves with contests such as “Chin Races”.  We had our afternoon rituals. Some people would watch The Young and the Restless, or smoke. We had “1-2-3” and “The Other Thing”.
Here follows a video demonstration of our entertainments.
When we did venture out we’d often be dressed identically. Biker jackets. Mom jeans. Gap t-shirts. One of us would have to go back and change. So I’d put on sosmething with sequins. But still with the mom jeans. WTF. 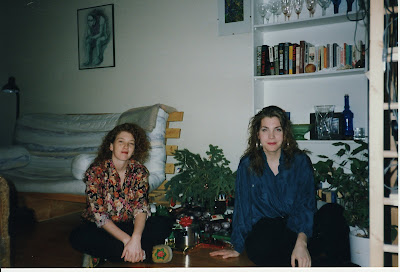 Then our friend gave us an old TV and we spent our time watching re-runs of The Golden Girls. Every. Single. Day. We loved the Golden Girls so much, I made her a pillow of them. Bettina was Estelle Getty. I was, you guessed it, Bea Arthur. 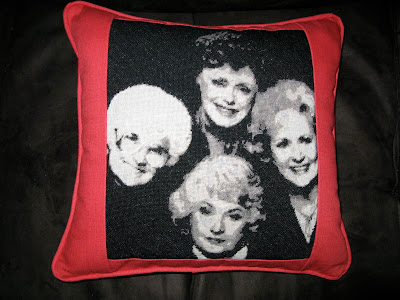 That was in 1989. Now, there’s only one Golden Girl left. I still work in bars occasionally, but in a different job. Bettina lives in a different town, so there are few opportunities for makeovers, sadly, and Quiet Times are few and far between. We’d both rather eat cheese than have chin races.  I watch a lot of TV. Yes, things are different now.
But why did my belly button stink back then?
Posted by Elpoo at 15:42