I’ve been thinking a lot lately about Ted Nugent.
I know, I know. Picking on Ted Nugent is about as fair as hunting big game in an enclosed hunting space. Not much of a challenge, but I never did like working very hard. And he is just a walking buffet of stupidity so it’s not really a reach for me, or anyone.  I realize that I am not the first person to be gobsmacked by how idiotic this man is – blogs and websites devoted to this exist – but I just… well, I just can’t NOT say anything, you know? It’s like not telling someone that their fly is open. Or that their ideas represent everything that is wrong with the world. That kind of thing.
Ted Nugent and hunting – he’s totally in to it and doesn’t care why he’s shooting something. He just wants to kill it. ("I don't hunt for sport, I don't hunt for recreation, I don't hunt for meat, I hunt to hunt ..." - Detroit Free Press , p. 12D, April 17, 1989). We could totally use him in Afghanistan. 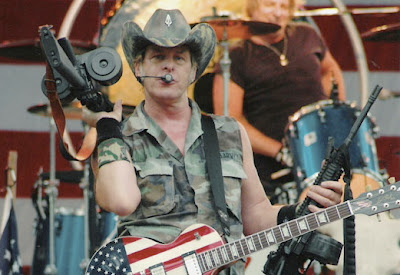 Except he doesn’t want to go to war, like a good Republican should. His only sensible intuition. He avoided military service by not washing for a month, crapping and pissing in his own pants for a week and consuming nothing but Vienna sausages and cola. The word hero comes to mind.
And by hero, I mean douche bag.
I get the idea that we should be aware of where our food comes from and that hunting for food is an ancient and natural part of human existence.  We all have to respect that our food comes from nature, and something has had to sacrifice in order to feed our gullets. Ted Nugent encourages everyone to hunt for their own food. Apparently, even if it's illegal. It’s hard, however, to hunt if you live in downtown Los Angeles and not on 340 acres of fenced Michigan prime hunting ground. And, I mean, what if you’re allergic to wild boar?
I don’t buy free-run chicken every single time, it’s true. I don’t want to be a hypocrite. But I also don’t buy chicken that’s certified 100% killed by cross bow either.
So us lefties have to pay people to do our hunting for us. And our evicerating. And packaging. If I did have to hunt for my own food, you can bet your arse I wouldn’t squeal like a psychopath on his birthday when I bagged my dinner.

He does not love Canada. He called Canada an “idiotic country” when Ontario disallowed black bear hunting for a season in 1999. Ten years later, in a radio interview he expounded his opinions on Canadian gun control laws with, “Hey Prime Minister, my name is TED NUGENT. Eat me!”
Makes sense. I mean, who DOESN’T want to have sexual relations with Harper.
Um. Me.
He loves America  and blames it’s problems on the Democrat party. He was particularly vitriolic toward Hilary Clinton.  He’s made cogent political arguments like "You probably can't use the term 'toxic c--t' in your magazine, but that's what she is.  Her very existence insults the spirit of individualism in this country.  This bitch is nothing but a two-bit whore for Fidel Castro." *
Damn it, then, I’m a Slut for Layton. I will have sex for money in order to show my support for Jack Layton.
He totally wants to have sex with Barack Obama, but is too shy to ask.


He clearly has gotta have it. 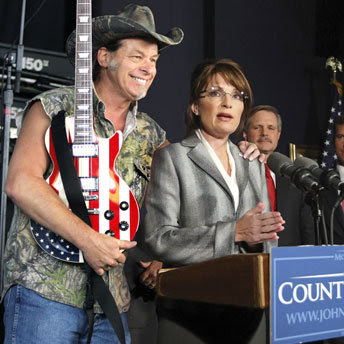 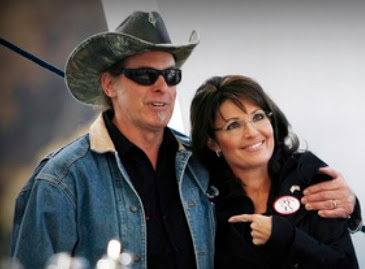 If Ted Nugent and Sarah Palin had a love child this is what it would look like: 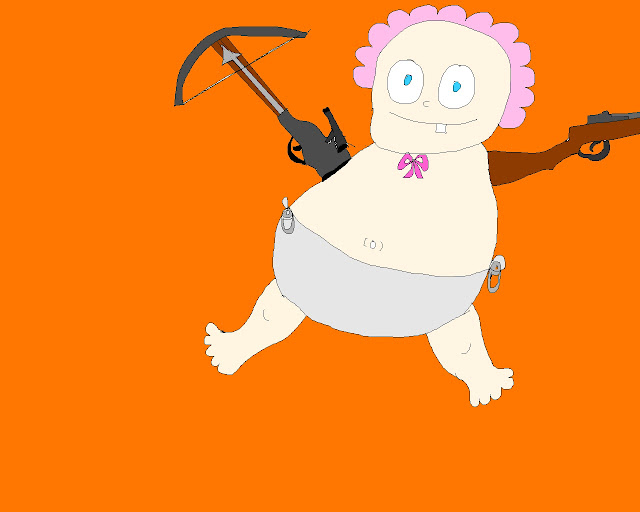 
I believe that, in addition to happenings in the auto industry and long term strained race relations, the downfall of Detroit can be attributed directly to Ted Nugent.
He is on the board of the NRA and believes the Second Amendment is the most important, not 200 years out of date, part of the US Constitution. He is super scared of Evil.
"The war is coming to the streets of America and if you are not keeping and bearing and practicing with your arms then you will be helpless and you will be the victim of evil." 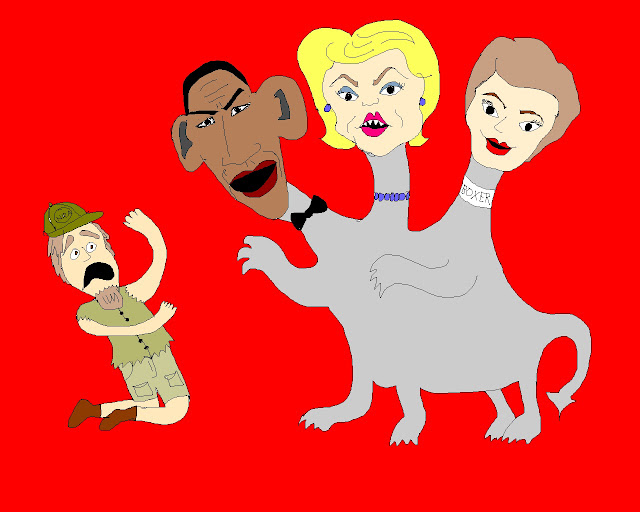 Giving people guns tends to lower homicide rates, he seems to think. This is why gun related homicide deaths in the US are ten times per capita than they are in Canada. Maybe he should go to South Africa where fire-arm homicides are 10 times what they are in the US. He loves South Africa and wants things to stay just as they are there even though the people are different.  Nugent said that the people of South Africa put bones in their noses and  “they wipe their butts with their hands.... I hope they don't become civilized…” He’s down with them though, a real homie.  "I use the word n----r a lot because I hang around with a lot of n----rs, and they use the word n----r,”  - Detroit Free Press Magazine , July 15, 1990). When in Rome, eh? Off you go to South Africa, then, Nuge. Put you in a fenced hunting ground. Sound the horn.
Says he is vehemently opposed to drugs and says he’s never used drugs, although did admit to using cocaine and cannabis at one time (People Weekly , Feb. 28, 1977).

Damn. What I had wanted to do was to write a clever little piece on what a douche Ted Nugent is, but there really is no reason. There is a lot of info out there on what a boob this guy is. Google it. I did.  I’m not here to reinvent the wheel or to take up your time stating the obvious.
So, the only thing left for me to do is to announce my...


“Insult Ted Nugent Haiku Contest”.
The winner will get their portrait drawn by me and posted on the blog for the whole of the interweb to see. Enter as often as you like until Sunday, June 26, 2011.  Winner announced on Monday, June 27. Please refrain from expletives. The word douche bag is allowed.


Just post your entry in the comments section. Leave your name if you want your portrait to be gender specific.