I have just returned home after a two week tour with our acoustic trio thing. I am glad to be home for so many reasons, but chiefly among those reasons is now I no longer have to listen to Murray and Brad go on and on and on about American Idol.
I used to think those guys were cool.
Here they are explaining how they got in to American Idol but they don’t really say anything and then they are just about to explain why they love Haley on American Idol so much and my camera quits.
They talked about it a lot. Murray was turned on to American Idol by his young child daughter thing. Murray, in turn, lured Brad down the path of the trumped up talent show. I picture them sitting in one of their hotel rooms, clutching each others’ hands like the finalists of a pagent, watching and waiting to see who gets booted off by three B list celebrities who have been deemed arbiters of greatness because the show’s producer owed their agents a favour. 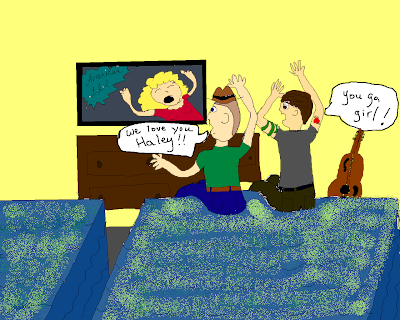 True, the people who make it to the various Idol shows do indeed have talent. And Haley totally totally Ohmygod should have won. The show was an interesting concept, but, like Survivor and The Biggest Loser, this one-by-one, Ten Little Indian style countdown, popularity contest, well, it’s worn a bit thin, hasn’t it? Artists used to slog it out on the road, driving for hours, paying dues and whatnot. Now they have to wait in line to maybe get an audition for American Idol and then have Paula Abdul tell them if they are good or not. I mean... Paula Abdul?
I’d rather sit in a van.
No, I’d rather have it be instant stardom and adoration. Who wouldn’t? If it meant I didn’t have to play Ithica again, I’d let Simon Cowell call me a pathetic worm and thank him for it. The people in Ithica were great, but that club was really grotty and the dressing room smelled strongly of cat urine. I wouldn’t touch anything in there.

I just don’t like award shows, and American Idol is a lot like a weekly award show.
I can’t watch any of them. The Grammys, The Oscars, Golden Globes, Junos, MMVA’s, any of them. It’s all too painful. So many swooping crane shots. All I care about is the clothes, and I can see all that online the next day. Come on. You don’t need a prize. You’re ALREADY RICH AND FAMOUS!
There’s just too much breathlessness, too much Jesus-thanking and “shout outs”. And every winner holds their tinfoil prize aloft as they leave the podium. “Look! I won a giant golden wiener”. 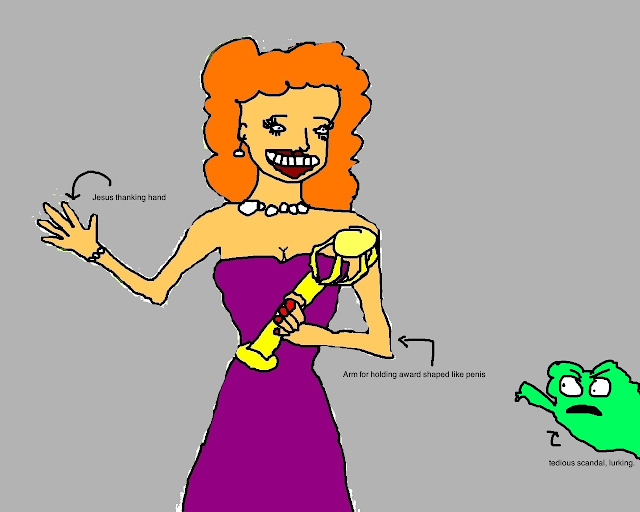 Why are so many of these awards shaped like penises? I mean if penises were all that, wouldn’t they have better aim when it comes to the toilet?
And I am not at all still bitter about Green Day stealing our Grammy from us. Not one bit. Stupid Green Day.
People take these things WAY too seriously, especially if they didn’t win, or if their friend didn’t win. For example.
idiot speaks
Other idiot speaks
Uttery douchery.
Almost as bad are people who sing national anthems before major league sporting events.
It’s a national anthem. And you are not Beyonce. Dial back the vocal acrobatics. It is a national anthem, and should be sung with dignity, not like you’re at a junior high school sleepover sing-along with Mariah Carey party. You all sound like idiots. Except for that one cop guy who sings before the Ottawa Senators’ games. He’s a separate thing. I make Brian mute the TV during the national anthems. I feel embarrassed for the singers. The women singers always wear too tight of shirts and too much makeup. It’s the National Anthem, for God’s sake, not Ladies Night at the Palomino Club. 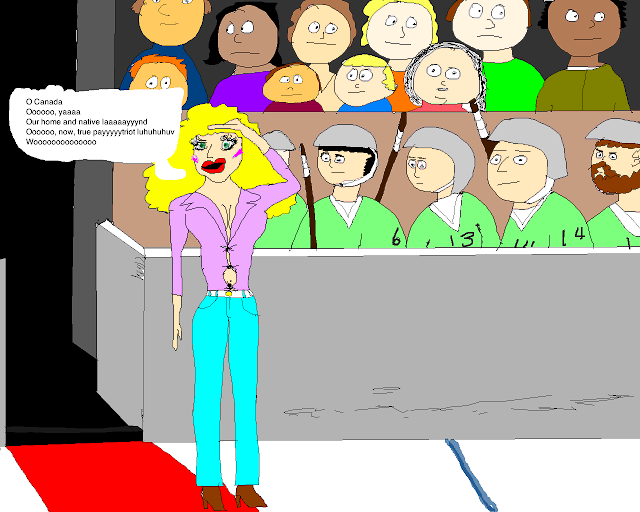 Here are some examples of why I can't watch people sing national anthems.


Here I am singing at an Argos game. 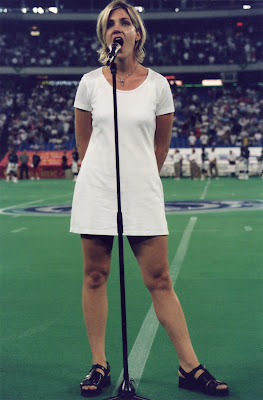 They couldn’t find anyone else. No one noticed me.
Maybe I should have stuffed my bra or held aloft a severed head. 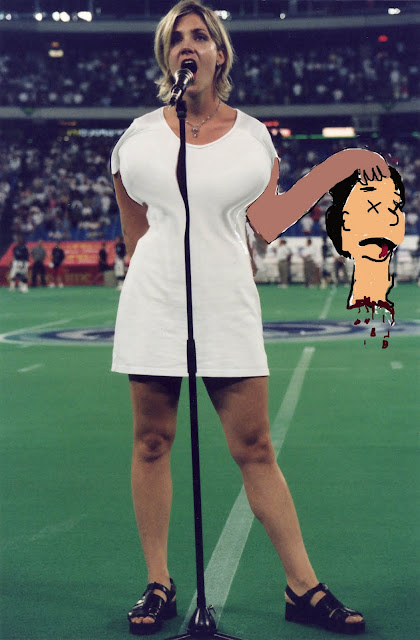 Much more interesting. Now that would have got me some press! Maybe.
Posted by Elpoo at 14:35