Men Are So Mysterious

I’m sure I will never understand men. Apparently there is more to being a man than peeing while standing and not being able to say the word “tender”. That is not to imply that men cannot BE tender. Yes, of course a few of them can. Usually when a man is tender he is a veterinarian or Jimmy Stewart. But saying the word “tender”.... they can’t do it. I’ve seen them try and it’s just pathetic, really. 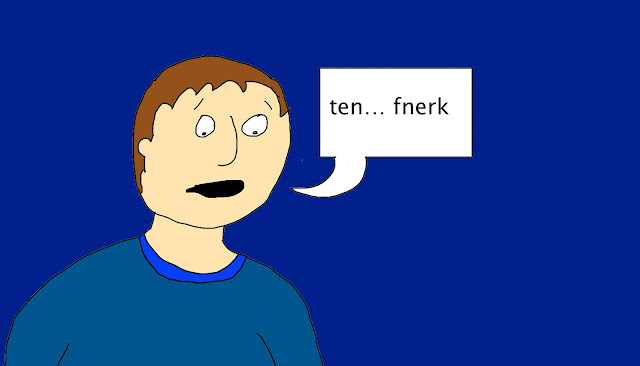 I do wonder what makes men tick and no matter what you say, I just can’t believe that Cosmopolitan Magazine is going to be able to shed any light on this great mystery. So I have a lot of questions.
If you know the answers to any of the questions posed here, please leave a reply in the comments section below. You can reply anonymously, if you like, and I will not be able to know who said what.  I follow each question with my suppositions.
Thank you in advance.
1. When men sit down, do their bits all squish up?
I think that yes, men’s bits do all squish up when they sit down. I imagine it would feel like a few small water balloons in your underwear.
2. Are all men proud of their poops?
I think all men are so proud of their poops that it’s ridiculous and adorable. Brian once made his into an ashtray for me when he went to camp.
3. Do men worry about their appearance? I mean all the time?
Men worry about their appearance, but only in that they are concerned that their incredible good looks will be like lasers and burn out the eyes of all women in a 50 foot radius. That’s why you see the kinds of things you can’t unsee at certain nude beaches in the Caribbean. Those men are 100% positive that they are dangerously sexy and hairy in their weird mesh thong that just looks like they put a lingerie washing bag on their wiener.

5. Do men get those awful horrible stabbing ass pains that my friends and I call “Holy Dinahs”? You know, where you actually have to lift your butt up off the chair because you don’t know what’s going on and what the hell and do I have bum cancer?
Men do not get Holy Dinahs. Men seem reluctant to discuss stabbing ass pains. 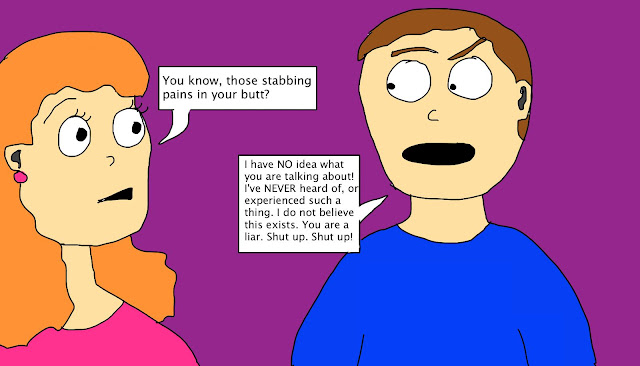 6. If men could do away with Valentines Day, would they?
Men would ban Valentine’s day if they thought it would get them out of having to eat dinner at any restaurant that is referred to as “fusion”.
7. What is a man’s greatest fear?
Men’s greatest fear is having a fat girlfriend. Or having man-boobs. And also they fear scary clowns. I looked online and a sample of what people think mens’ greatest fears are include: their partner leaving them; failure; having too many feelings; being thought of as feminine; having a small wiener; being ridiculed; balding; being poor; running out of beer and cheese. 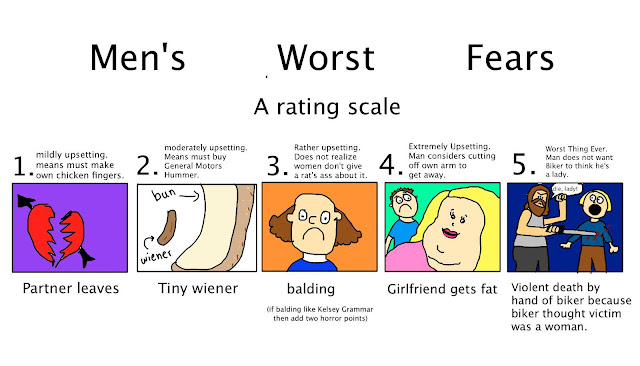 8. For men, what is more important, pooping or watching the shootout to the end?
Men will poop their pants in order to watch the shootout to the end. They say they aren’t happy about it, but I’m not buying it. In fact, I believe men frequently just poop their pants because they are men and see it as their right.
9. How much of what women say do men take seriously?
Men take what women say very seriously. Except for when women talk about  their “feelings” or the “relationship. At those times, men go to the place in their brains where there are Saturday morning cartoons on. When women talk about “connecting”, men are mentally pouring themselves a bowl of Captain Crunch and settling down to Teenage Mutant Ninja Turtles. 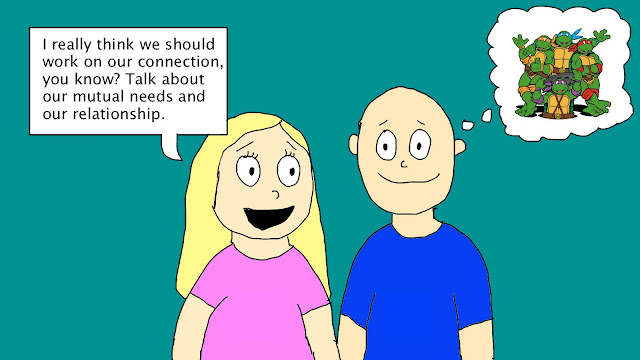 Men also don’t tend to take women seriously in the workplace. Still!
Brian takes me very seriously . He better or I will seriously get “medieval on his ass” and I do not mean sexually. Necessarily.
10. Would a man rather eat 10 small cans of  cat food in one go,  or go on a date with someone they met at a Walmart in Des Moines? I mean, if they could only choose one.
Brian says he’d rather date someone he met in a Walmart in Des Moines. Which is so sweet, because that’s where we met. However, that’s the last time I feed him delicious cat food. What if I I could combine the two choices, though, to make it easier for my love. Like, I’d have to kill a woman in a Walmart in Des Moines (risky, I know, but he’s worth it). Then I’d have to put her in the freezer so she wouldn’t get too much more stinky. Then I’d put a popsicle stick in her ear and spread cat food on her head and make a trashcicle. He could drag her to a movie date by her frozen ham-arm. 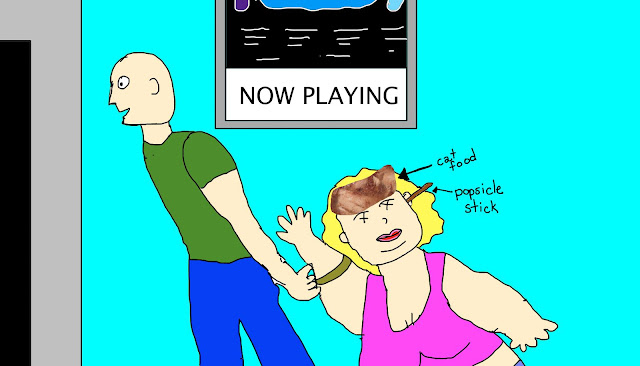 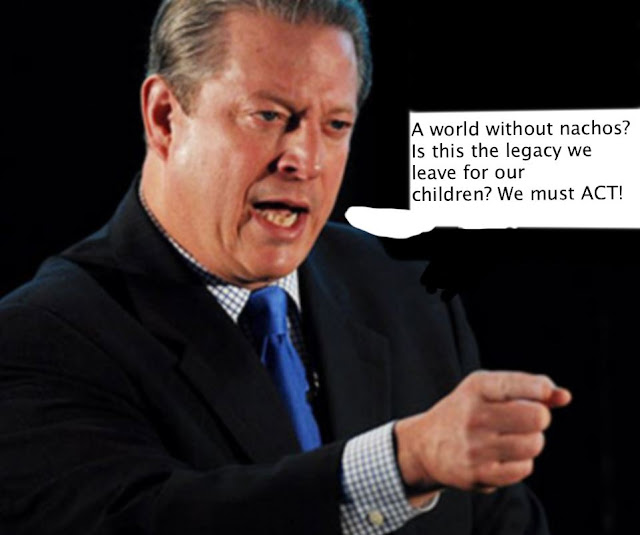 Some might say, hey Elpoo, the answer to all of the above is “Who cares what men think?”.
Well I do. I care very much.  It’s not because I want all men to like me. No, it's  not that at all. I just want all the hot men to like me. The hot and/or rich men.  The ugly-stupid men, ah, who cares if their bits squish or they get stabbing ass pains. But for the super sexy and rich man, well, I want to know how they tick so I can manipulate them in to giving me what I want.
You know that this is all moot anyway. I can’t really use the knowledge in any meaningful way. I’m already married, so it’s not like I’d improve myself or alter myself in any way to impress a man. I’ve got one trapped already. Trapped in a web of his own making. Pass the cake.
Bwhahahahahahaha,

Email ThisBlogThis!Share to TwitterShare to FacebookShare to Pinterest
Labels: girlfriend gets fat, I am fat, Men are mysterious., men's greatest fears