Am I the only person who thinks that Linda Rondstat and Sade sing off-key when they hold a note? I probably am, because everyone knows that they are super amazing famous  singing people. Have you heard Blue Bayou lately? I mean listen and tell me if there aren’t a few times when something in your guts says: That’s not quite right – I don’t know how, but it feels wrong.  And Sade – well, I totally dig her music and her band, but to me, all she is. is an alto who doesn’t seem to try very hard. Celine Dion can hold a note and it does not go off key, ever. I am not crazy about Celine Dion’s stuff (musical or otherwise), but she can freakin’ sing, dammit. Take away all that chest banging, vow-renewal-carry-us-in-on-big-Egyptian-golden-trays, weird faces stuff and she can sing you into your grave with purity and you’ll know it was a good death. And she doesn’t go overboard with the embellishments (are you listening Mariah Carey?).  So, it kinda bugs me that Linda Rondstat and Sade sing slightly off key and everyone wants to smooch their backsides.
Now Stevie Nicks, she sings off key. But it doesn’t matter one little bit. 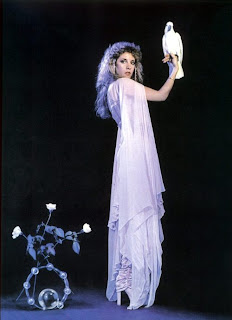 You know why? Because she can do whatever she wants and she’s still awesome.
I love Stevie Nicks. I loved her from the moment I saw the cover of Rumors. This was who I wanted to be. When I was 12 or 13, I told some guy who was going to the boys boarding school outside of my hometown that my name was “Stevie”. It was a 3 phone call relationship. I knew I would never actually meet him in person, so he’d never find out that I wasn’t called Stevie. Or that I looked like this: 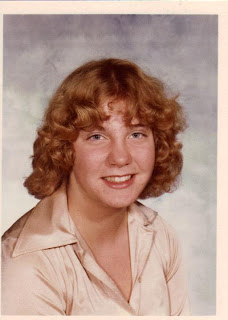 I thought she was the most beautiful, most exotic woman in the world, and I wanted to be just like her. All those scarves and chiffon and spangles. Like a female Steven Tyler (who I also loved, but more of that another time). Her big earrings and all that hair hair hair that always had a fan blowing it - what red blooded, attention seeking, overweight 13 year old WOULDN’T want to be her. Boring ones, that’s who. Ones who wanted to be like Marie Osmond or Olivia Newton John. No thanks. 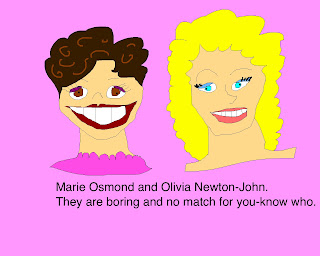 Marie and Olivia = not sexy, probably wear waist high panties.. Stevie = super mysterious sexiness, bikinis. Not a thong because that’s just asking for trouble, isn’t mysterious, and isn’t for ladies.
There are a lot of rumours (ha ha ha ha) going around about Stevie Nicks that involve illicit drugs, straws, her bottom and her personal assistant. There are also people who make comments about her weight gain in the 90’s. Let me tell you that none of that crap matters. You know why?
Because she’s the frickin’ GYPSY, man! 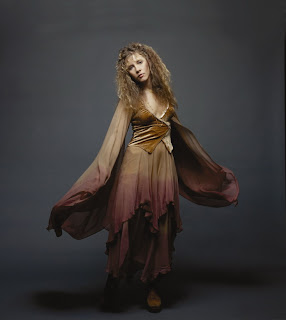 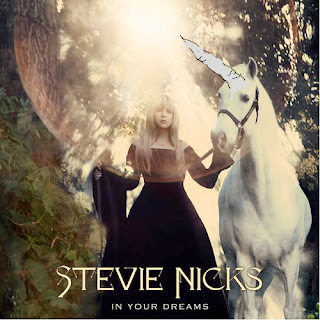 And it doesn’t matter what she does, or what she weighs because the GYPSY freakin’ rules, ok?!  Every fringed inch, every adenoidal wail, was like a siren song to me. “Unleash the wizardess, Ellen. Become one with the unicorn goddess that you know you are meant to serve. You won’t always be fat and pimply 13 year old (a lie). Dance the dance of nymphs with me, here in front of this industrial sized fan. 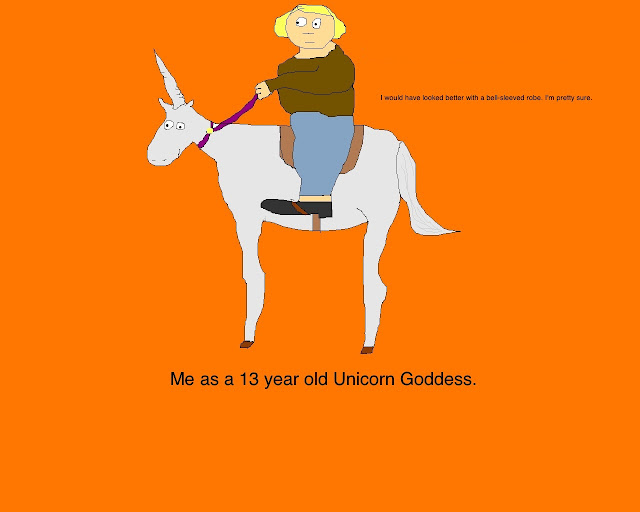 But first you need the robe with bell sleeves. 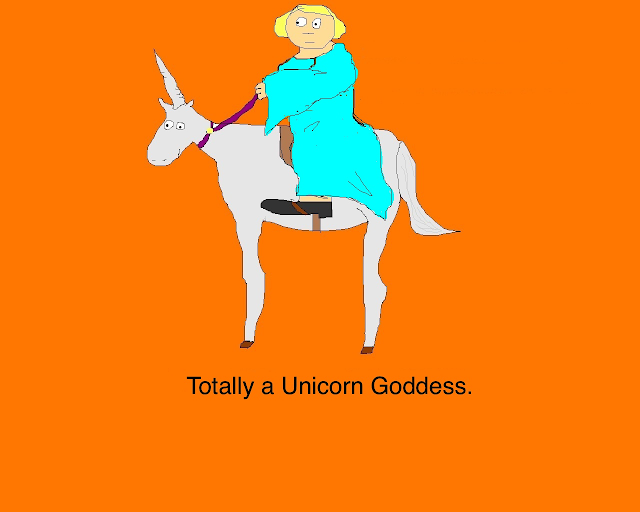 See, if you have the robes and stuff, you’re bound to be awesome.  The Gypsy had all that stuff going on. Fringes, too. It's mega.
So don’t diss her.
You try playing a tambourine like that. See if you’ve got the passion. See if you look ethereal and doll like at the same time. You won’t. Not even one little bit.
Click -HERE- to see a super long drawn out video of My Muse.

You can see at about 7:33 that The Gypsy has clearly had enough of all the fakery and wants to get close to her fans. No No, she cries, I must touch them.
She also dedicates the song to her “best friend – The White Winged Dove”.
Gotta admit, that’s pretty stupid.
Posted by Elpoo at 10:27