Face Horns and Religion. Or: How I Stopped Bitching and Learned to Love the Gaga.

I think it’s high time we discussed something pretty serious. Lady Gaga. I didn’t know what The Lady Gaga was until she’d been famous for a couple years already. People looked at me like I had never heard of The Rolling Stones, or Kleenex. I guess I don’t exactly have my finger on the pulse of what people are into these days. I rarely listen to music outside of the gym. I prefer quiet. And Lady Gaga is not quiet.
But that’s not why I have an issue her.
Lady Gaga said she is opposed to plastic surgery. To be clear, I don’t really care if she is for it or against it. She’s, what, 25? Wait til she’s 50. Wait til her cheek horns turn into wobbly jowls. Then I’d be interested in her feminist perspective on facelifts. And I’m not sure why facial and shoulder horn implants are somehow different than a facelift or boob job.
And then, 6 weeks later, she said she might be in to having plastic surgery some day, after she’s “popped out a few Gaga babies”.  Maybe she should have her uterus installed on the outside of her body so that we could all watch her gestation as a bit of performance art. It’s really only a matter of time. And actually, kind of a cool, if icky, idea.
She refers to herself as an artist. I can’t even comment on this it’s so ridiculous. If she’s an artist because she’s made something then anyone who has ever made toast is an artist.
She wears a bra that shoots flames.

That doesn’t make her an artist. It makes her a potentially lethal stripper.
Lyrics to one of her songs:
Rah-rah- ah ah ah
Roma, Rhumba- Ma
Gaga Oh la la
Want your bad romance
Walk walk fashion baby
Work it move that crazy bitch
Why? Please, why?
On principle I do not like songs in which “the artist” announces him or herself. Eminem, Kid Rock, are you listening?
If anything she is a walking social commentary on how painfully bored we all are. We’ve seen it all and need more and more spectacle and  she has to pour on all the weird wigs and glitter and tinfoil clothing to cover the fact that she’s really not much to write home about. In the music business we call that “polishing a turd”. I mean, come on. She refers to herself in the third person. She’s more of a drag queen than a drag queen.

Actually, what do I know?  Maybe she is an “artist”. Maybe she really is on the cutting edge of music and is doing something Madonna hasn’t already been doing for years but in slightly less weird clothes. Maybe she’s the love child of Madonna and a Transformer. Wouldn’t be impossible, Madonna probably had sex with a Transformer. 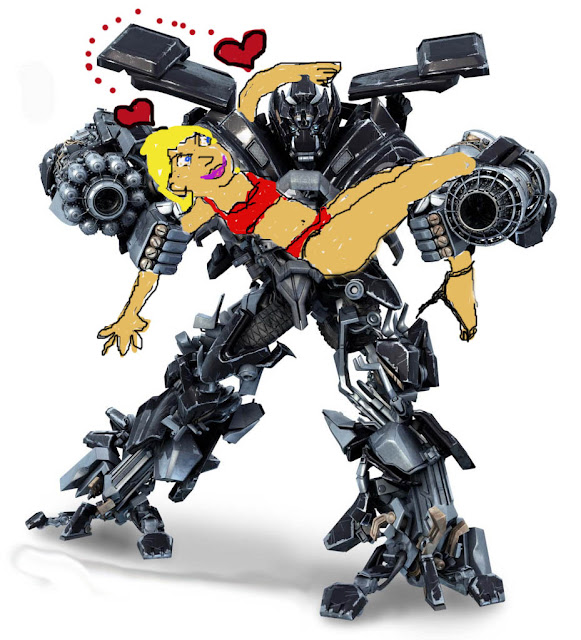 And then ate it.


But seriously, maybe I should give Lady Gaga a chance. I mean, she is so mega-hugely successful can 12 million-billion people be wrong? Of course not. What she is doing appeals on some level. Very hooky tunes, irresistible rhythms  and simple, if incomprehensible,  lyrics. It’s not “art”, but it is well crafted. It’s asinine, but sometimes that’s just what you need. You can’t always eat vegetables. Sometimes you really want Marshmallow Circus Peanuts filled with the contents of Pixie Stix. Who wants to listen to music with a “message” anymore? Yawn.
So maybe I shouldn’t rag on Lady Gaga. As much as I don’t like her “schtick” I’d way rather listen to her than, say, Billy Bragg. At least Lady Gaga isn’t all preachy and doesn’t make me feel ashamed of my shopping habits. Billy Bragg is kinda like Christianity in that he makes you feel self righteous if you follow the message in his music, but super guilty if you do the opposite.  If you tell someone you’re going to the Billy Bragg concert, you can feel pretty smug about it. Tell someone you’re going to see The Gaga, and it’s as if you are  admitting you’ve spent the whole day in your pyjamas.


Lady Gaga, then, might be the musical equivalent of the Church of Spiritual Humanism. It’s more like “Hey do whatever you want, as long as it doesn’t hurt anyone else. Anything goes, here, there’s no deity to answer to (other than The Gaga), so act according to your conscience. Revel in your humanness! Concerts are sermons. Dressing up like Gaga for the concert is ritual for supplicants. 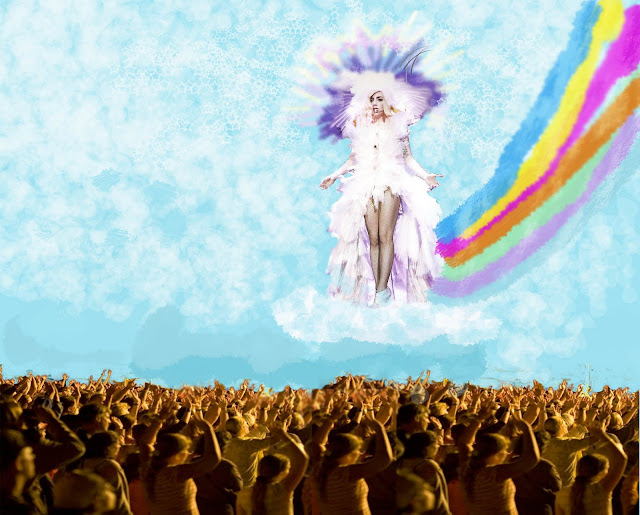 I also need to give myself a shake. Just because Lady G is not my cup o’ tea, it doesn’t mean that she’s not good or that she’s not an artist. She’s clearly had an impact on peoples’ lives if they are willing to camp outside in the rain for 4 days for a chance to see her on Saturday Night Live. 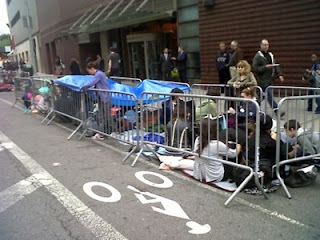 I mean, it’s not as much of a sacrifice as, say, blowing oneself up in a train station, or moving your whole family to a new country and then forcing a bunch of the indigenous peoples to worship your god (and then kill them all), but it still is hardship endured for the sake of one’s spiritual leader. She has supported some good causes.  And if I were in her place I would wear EXACTLY that amount of sequins at all times. I’m just jealous.
So forgive me Great Gaga. I was a small, cranky whine in a sea of smiles and glo sticks (do people still use glo sticks?). But I’ve seen the light and if I wasn’t so middle aged and jaded, I’d just dance, too.
Posted by Elpoo at 14:20