Foodie Friday- The Gull and Firkin 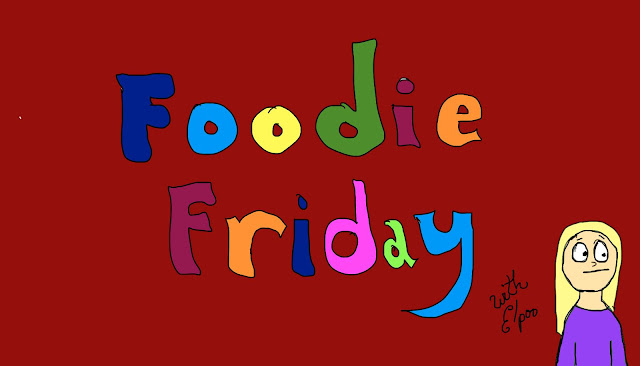 As I’ve mentioned, Brian and I don’t like change. We are total willing love slaves of routine. I get upset if there’s not hockey game on Tuesdays - and I don’t even watch the game. I just don’t like any one else screwing with my schedule, you know.
So it won’t surprise any of you to hear that Brian and I go to the same restaurant for date night every week.
When we first moved into our new neighbourhood we tried a different local restaurant every week. It was kinda fun, exploring our new hood, and we probably could have fallen into that as a routine - you know - the routine of eating somewhere different every week. But we’d gone a few times to The Gull and Firkin and they did something that altered the trajectory permanently.
They learned our names and had our drinks ready before we’d ordered them.
Clever. Very clever indeed.
We were so thrilled that we’d, you know, made the cut with the cool kids that we stopped going anywhere else. I mean, how could we? We wanted to go where everybody knows our name. 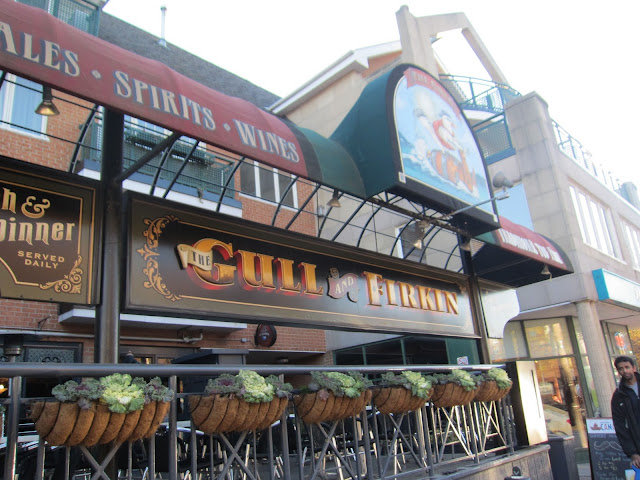 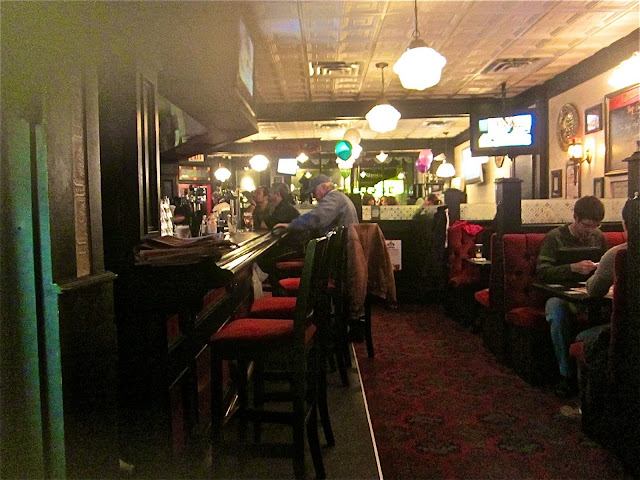 For the first couple years we went every Friday after Brian got home from work. We sat in the same section (called “The Snug” at the back of the pub), and if we could, the exact same booth.

Our server was Jenny, who looks like Winonna Ryder, but I have a feeling she swears like a sailor.

We ordered the same thing. Brian had  a pint of Heineken, and the Firkin Burger with mayo, no gravy on the fries.  I would have a club soda with lime, and the grilled vegetable salad with grilled chicken and goat cheese, dressing on the side.


We had “a usual” which made us feel like we were the main characters in a TV detective show as opposed to a tired writer and his nervous girlfriend. 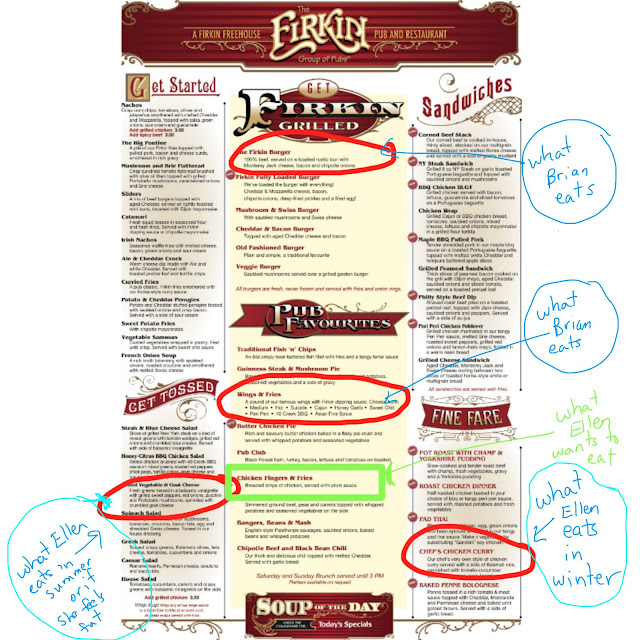 One day, Jenny wasn’t there. And she didn’t come back. She’d moved to SATURDAYS. W.T.F.  The owner/manager of the pub, Dana Kerbel said that we’d survive. She had a lot of excellent staff. 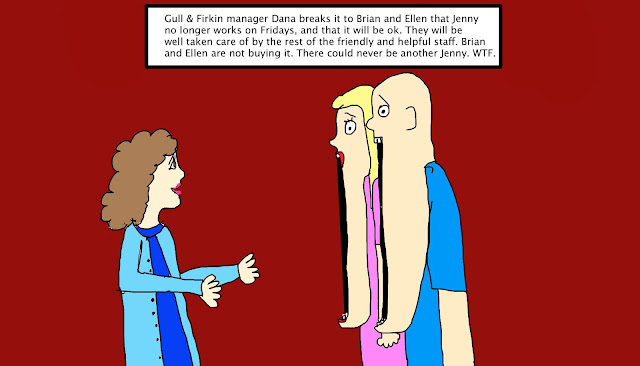 So we got to know Troy who always says “Hey Guys” and “Do we even need menus today”? 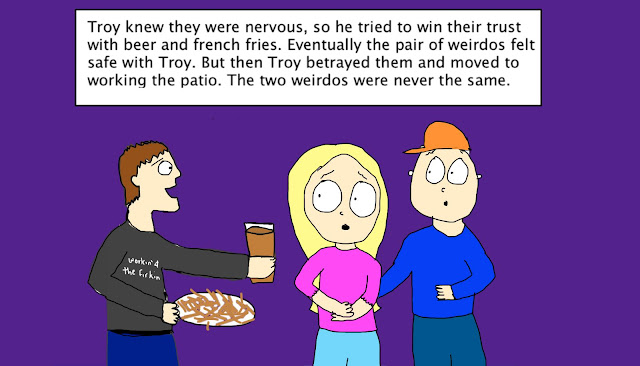 In the summer, Troy moved to working the patio crowd. 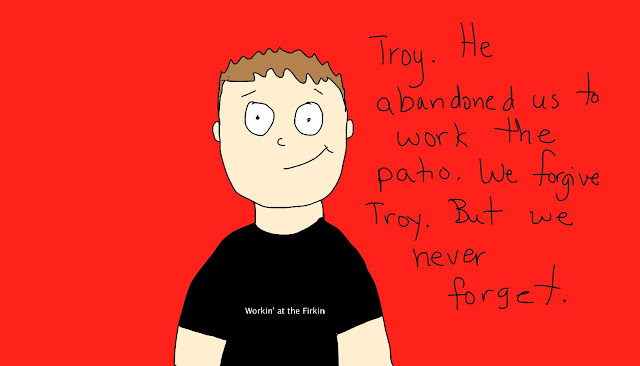 So we go to know Ashley.

It’s always hard to work in a new server. They might not know that for about one hour a week, we are SPECIAL. Eventually, they learn. And now Ashley knows. And we like Ashely. Lots of people like Ashley. She was even written about in the Toronto Standard. She’s that famous.

Then we brought home our new puppy Sam, and we had to move our date night to Saturdays because he is so bloody demanding and high maintenance and adorable that we’re too busy on Fridays to deal with his myriad needs and then go out for dinner. So Saturdays was the new routine.
Saturdays and the return of ... yes.... JENNY. Sometimes she’s not even our server, but she’s in the pub itself, so that makes us a little less anxious. We hardly see Ashley any more. I think we kinda freak her out with our bland exteriors and robot like ways. She is innocent.

As we've got to be more relaxed with Ashely, we sometimes order a different thing. It has taken her a while to make us feel safe, but we look to her now for guidance and care.  Brian has medium wings with double dill dips. I get the chicken curry with Naan.


We’re usually there pretty early, like 5pm, so it’s relatively calm, and other than a few children, there’s nothing to complain about.

Jenny says (and we listen to everything Jenny says) that it gets pretty crazy in the evenings. I like to hear that. I like to think that I’m part of the calm before the storm. They like us because we’re predictable and don’t linger. We order the same thing. We have two beverages each, and we’re gone.


You should go there and watch a sporting event. It seems to be the thing to do judging from all the positive reviews of the place I found on the innermicnets. If you do, sit in Troy’s section but then all of a sudden, without explaining, move and sit in a different section. See how you like that, Troy. It hurts, doesn’t it? It hurts.
Nah, just kidding. Sit where you want.
Except our booth. Stay out of our booth. You never know when we’ll show up.

Actually, you know exactly when we’ll show up, so other than Saturday late afternoon, you can sit in our booth.  Have fun. Leave a good tip.

Email ThisBlogThis!Share to TwitterShare to FacebookShare to Pinterest
Labels: our dining routine, pub food, The Gull and Firkin Toronto