If I Had Fifty Million Dollars - Craft Cabin Edition

I spend a lot of time thinking about what I’d do if I won the lottery. My life is pretty damned good, so I’m not complaining, but I’m one of those “more is more” people. Today I’d like to introduce to you the first of a bazillion blogs called “If I Had 50 Million Dollars”. The Barenaked Ladies really dated themselves with their “If I Had A Million Dollars” song, didn’t they? I mean, today they could maybe pay off their student loans with a million bucks. Or pay their entertainment lawyers. Yah, Canada's Male Sweethearts, not going to get you too far anymore.

No. I need FIFTY MILLION.
Everyone fantasizes about what they would do with an epic windfall. Pay off bills, help family members, travel, establish scholarships, buy a new car. We’ve all got a few expensive dreams we allow ourselves to distract ourselves from taxes, visa bills and rising food costs.
So, first let’s assume that I’ve won a mega lottery.
By this I mean that Brian has won lottery, because I don’t buy tickets, but remember, this is a fantasy and I’m assuming he’d give me all of his winnings. 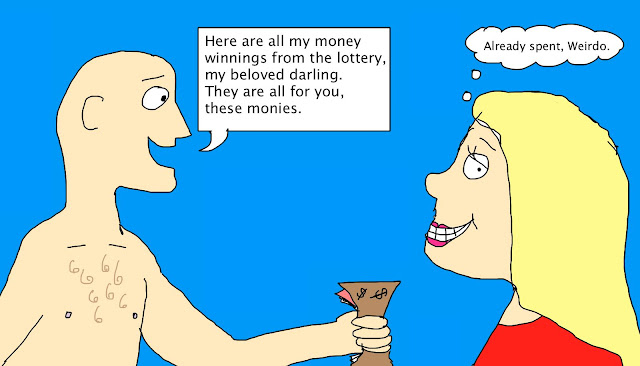 Anyway, secondly, let’s assume that I’ve taken care of my family - set them up and taken care of all their wants and needs, etc. Ok, all that obligatory generosity - out-of-the-way!
I would, of course, buy the lake front Muskoka house of my dreams.
And near that house of my dreams would be a super freaking awesome
CRAFTING COTTAGE

Not just a nook, or a pile of wool in a basket by a chair. No. I need an entire building devoted to being twee. Situated on our large lake front estate, nestled in the pines, would be Ellen’s Craft Cabin.

It would have amazing light spilling through large lake view windows,  for oil painting and courting the muse. 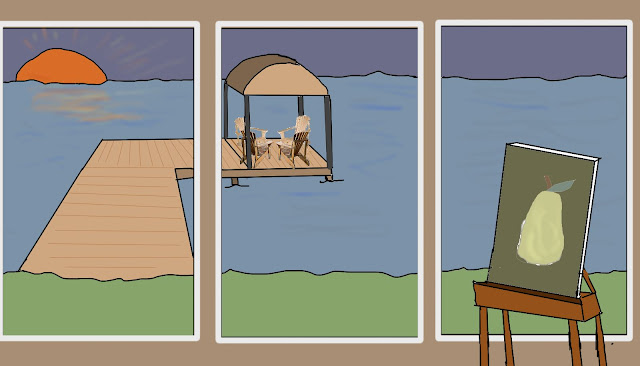 There would be a fireplace, for all crafting cabins must have this essential ingredient for cozy twee-ness. 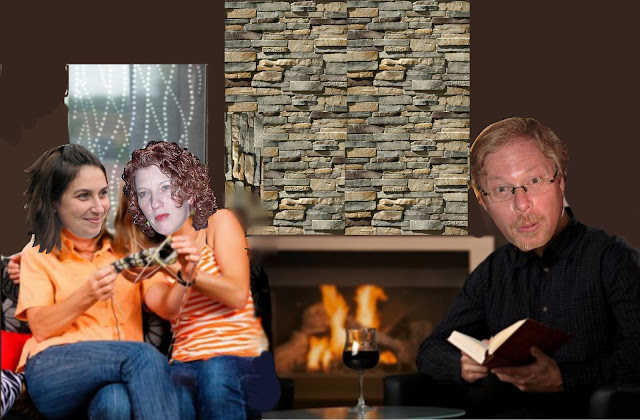 A variety of “craft zones” would be set up that would include sewing machines stations, knitting nooks, needlepoint niches, paper craft tables.

Built in supply cupboards and shelves line the walls filled with all the accoutrements of squealingly delightful nobblery (Nobblery is a word I made up for awesome piles of amazing little things like ribbons buttons, bits of lace, rubber stamp parts, tiny bells, sew-on googly eye buttons for puppet making, bottles of glitter dust, pots of glue, squares of brightly coloured felt, construction paper, etc. I am giggling just thinking of this).

I think this fantasy stems from a distinct memory I have from my childhood. I was invited to my friend Pam’s birthday party and my mom came up with what I figured was/is the BEST GIFT EVER. It was a wrapped box (an old Arrow shirt box from Eaton's), with inside a pad of coloured paper, crayons, scissors, glue, sparkle dust, cheap water colour paints and plain paper. Pure magic. I must have whined and whined because I think I got one or two from my birthdays along the way. To be well stocked in crafts meant I was ready to be uber creative, and therefore, cute. 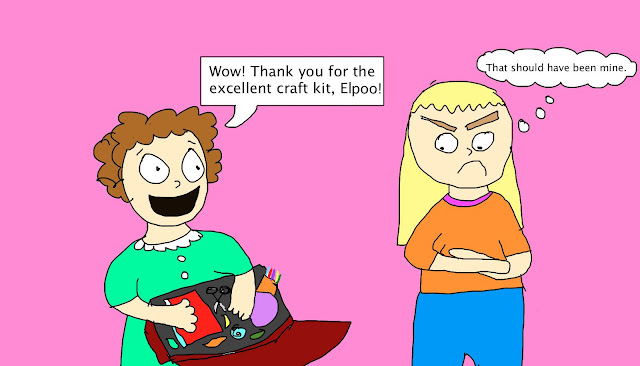 Anyway, back to my CRAFT CABIN and all it’s delights.
There would be long tables (2) for cutting fabric.  A wall devoted to yarn, threads and silk thread for needlepointing. 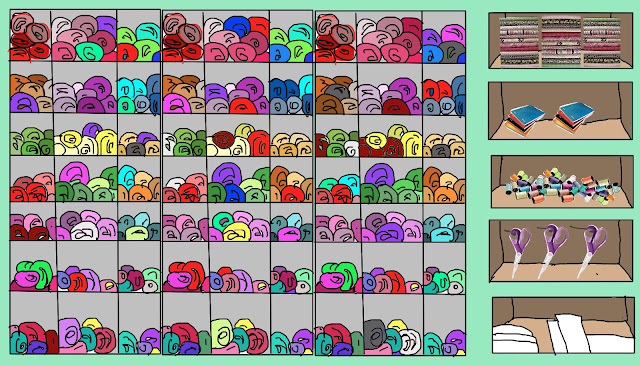 Needlepoint canvas on roller bars.  A clothes line outside for hanging tie-dyed nonsense. Easels (3) and canvas all at the ready. Potters wheels (2). Kiln outside (and instructions. And insurance). 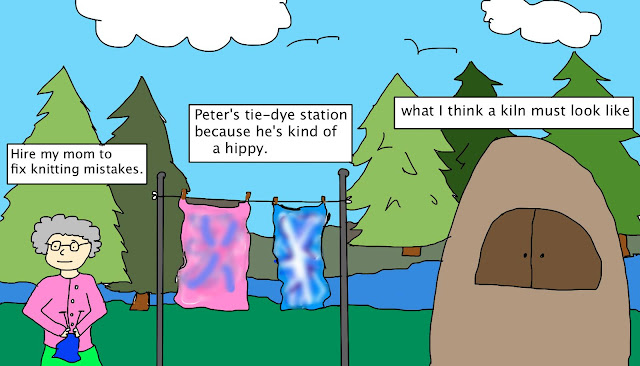 A built in sound system will quietly pipe in classical music or, if I’m feeling zany, Irish folk music.
A small fridge for holding beverages and snacks....
For my epic crafting weekend parties!!!

My crafty pals would drive out after work on Friday (or whenever they wanted, really), and I’d get them settled in their guest rooms. We’d  have a nice light dinner and then we’d all retire to the gazebo on the dock and listen to the evening birdsong. I’d serve only the best cheese and not on white plates either because Ryan told me once: 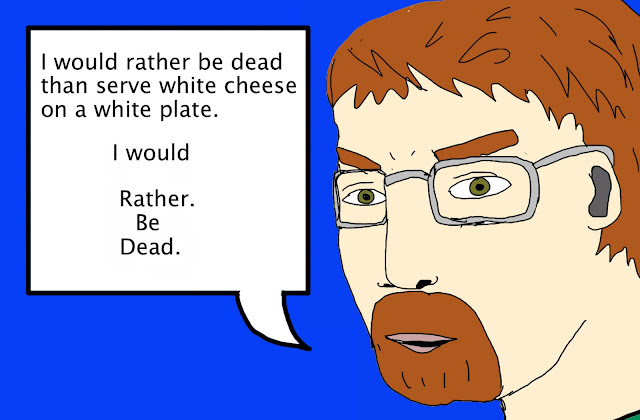 Ok, it was a joke, but I think he truly meant it. He has strong opinions on cheese presentation. Kind of makes it hard to really get to know him.

We’d listen to Loralee M. and Lori K sing the Children’s Prayer from Hansel and Gretel.  And then we’d all go back to the main house for a good night’s sleep. The next morning Ryan would make us his gingerbread waffles and then we’d go for a nice walk in the woods where I wouldn’t kill and dismember any of my friends. We’d come back and go directly to the CRAFT CABIN!
Oh the crafting that would ensue. Crafty pals could try a bit of this craft a bit of that craft, or they could just stick with what they know. It would be a little like Kindergarten, but only people could drink wine if they wanted to. I mean, it’s just after breakfast, but I’m not judging you Megan. 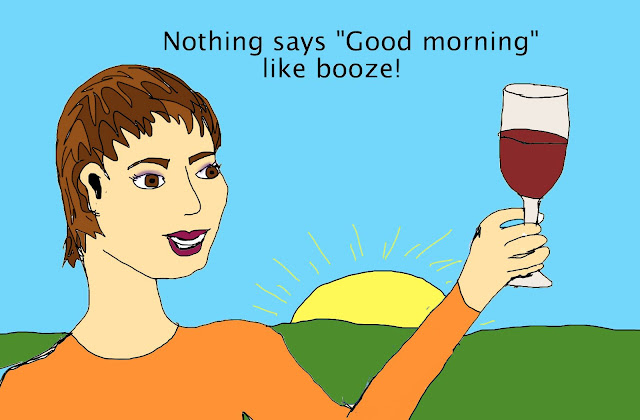 Lunch would be brought to us by Brian who will do this one small favour for me in return for having me out of the house for the entire day so he can scream at the football game in peace. 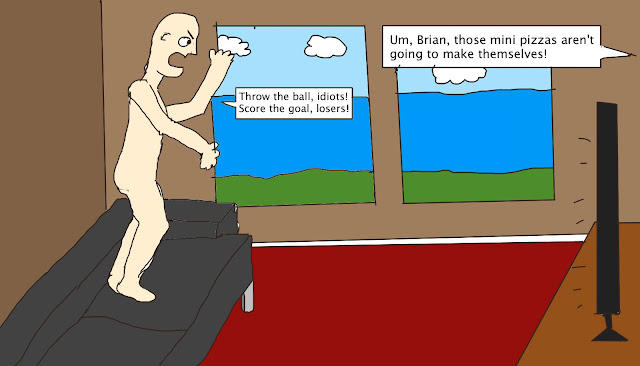 After a long day of heavy duty crafting, we would sit in front of the fire and talk about how awesome we are and how lucky we are to have each other. And how we don't need 50 million dollars to get together for crafting parties, and we don't need 50 million dollars to have fun. But apparently some of us need booze to have fun. Not mentioning names, Shmegan.
Posted by Elpoo at 08:00

Email ThisBlogThis!Share to TwitterShare to FacebookShare to Pinterest
Labels: 50 millions dollars, crafting cabin, crafts, I love my friends., lottery winnings, my husband should give me all of his money