How I Tolerate Sports

If you are like me, you don’t give a rat’s ass about sports. It’s complicated, competitive, and there’s always some guy being an idiot. Even in women’s sports, there’s always some guy being an idiot.
With the possible exception of pairs figure skating, I have no interest in watching sports. But my best beloved is freaking obsessed with sports. He likes all sports. Except for golf and figure skating. And he’s a little mystified by cricket, but will watch it in a pinch. He has a few favourite teams, and of course, as a Toronto resident, he is required to be a Leafs fan and at least condescend to watch the occasional Raptors game. Summers are all about the Blue Jays.

Brian and I have been together just 6 years and married less than one, so I imagine the bloom is still on our rose. Therefore, I still feel like I have to find some way to pretend to care about sports.  When we first started dating, I would tell my friends that it was so “neat” to date a guy who was into sports. “He likes football!”, I would squeal like I was telling people he was an actuary, or a show dog or had a permanent friends and family discount at WIlliams Sonoma. Back then, for me, dating a sports fan was kind of exotic.
We watch sports on TV almost every night after dinner. Oh hurray!
I’ve come up with a couple tricks to make watching sports tolerable.

-Get a stop watch and time how long husband goes between yelling “Shoot/score/throw you idiot”. In my case, if we are watching any Toronto team, this time is very short.

-Allow myself at least one indignant comment about the cheerleaders. 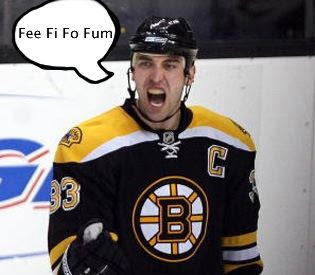 -Find one sexy player per game to cheer for. I have done this for all of my husband’s favourite teams. And for some teams that he doesn’t like.

-Make a game out of enraging husband by cheering for the team that has a Manning. Included in this is to look hurt every time husband calls Payton or Eli Manning a goof.  Take it personally. Withhold sex til he says “I love the Mannings”. This could backfire on you. (Ok, just this second he yelled “Kill him! He’s a Manning” at the TV. This is not a lie. It goes on ALL NIGHT). 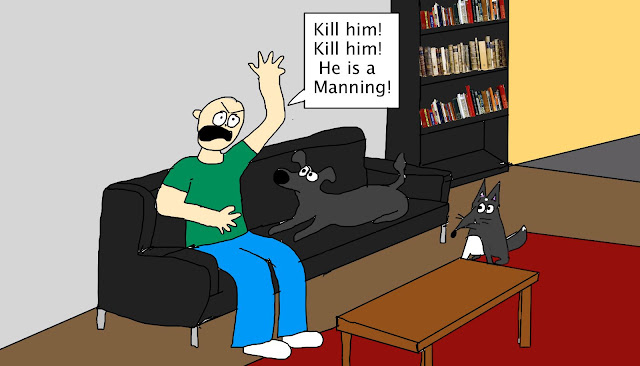 Have theme songs or Catch Phrases for different players:

Whenever the play by play announcer says that “Kessel is on the half boards” you sing this:

Every time the play by play guy says anything about Ferdenand Pisani, you have to yell, “Ha Ha The Googly Eyed Pisani!”

Jose Calderone must be made to say “I like to play with my friends this game”.

-Act impressed everytime husband tells you how he knows what a balk in baseball is. Resist temptation to tell him “ I know what an onion is”.

-If you are lucky enough to be forced to watch every Leafs game this season, count how many times the arena plays “Oh Black Betty” between plays. That number is the number in hundreds of dollars that your husband must give to you.


I hope that these ideas work for you. The alternative is to do your needlepoint/knitting/quilting/crack/blogging/dog grooming in another room. But then he'd win. And that's not sporting.