Life on the Road - Our First Tour


Our first real road trip was in 1989 . We had started to get a little bit of a buzz going in Winnipeg from our super duper shows at the 1989 Winnipeg Folk Festival 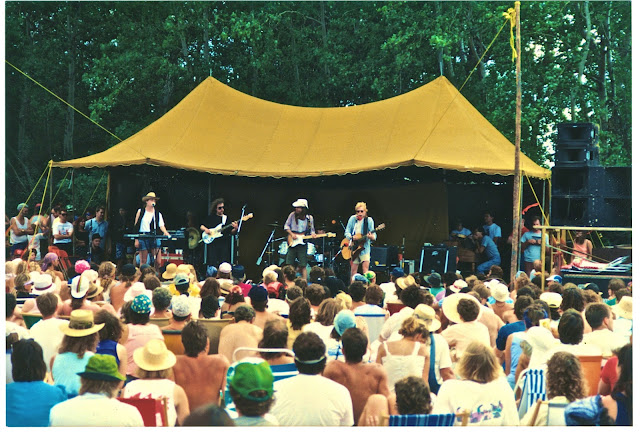 and The Buskers Festivals that are so popular with hippies and vegetarians. 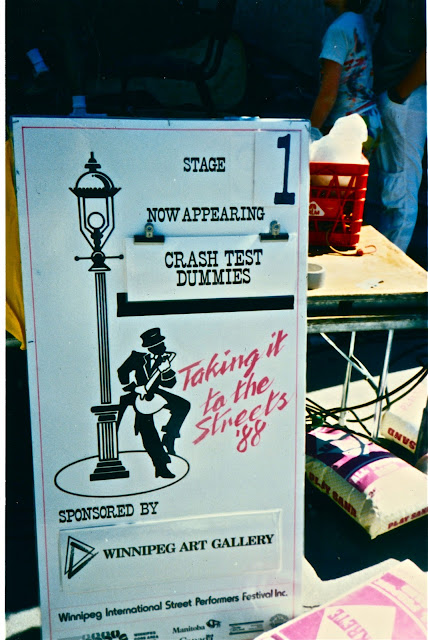 I’d just bought a used, student sized accordion with which to play our folk rock tunes.

I had no idea how to play it. Never learned. Just played it like a sideways piano. I have not an ounce of polka in me, I suppose.
It came time to go on the road. We’d been getting some attention from record labels, and we were advised that we should head out east so that people could have a look at us and start fighting over our folk rock asses. We drove from Winnipeg to Southern Ontario and we played for the month of October at various venues. We had rented a 15-passenger van and my family donated an old, odd sized mattress that the guys put on a wooden platform that they rigged up. Our drummer wouldn’t sleep on it because there was a stain on it. I recall sleeping very well on that mattress. I am unsure of how safe this was. Our gear when underneath and our luggage in a rack on top of the van.  The drive from Winnipeg to Kingston would have taken us a day and a half or so. This was in the days before the internet.

Dan, Brad and our sound man - George Addis, would have done the bulk of the driving. I listened to my walkman. The kind with cassette tapes.
I had a photo of George Addis hanging a moon in which you see way too much detailed topography. Just saying. He showed us his bum a lot.  Not sure why. Gives you an idea. He had an extreme mullet, which was au courant.  I had to throw the photo away. It was that upsetting. And his anus was an awful sight, too.
Anyway, I have a postcard that I wrote to my family that said we arrived to Kingston early so had to spend another day in a hotel which meant we would lose money again. I mentioned twice, in the space of a small postcard, that I had “the trots”. I remember that we had to get me some Imodium and that it was caused by a bad hamburger somewhere around Barrie, ON. To this day I get stomach cramps anywhere near Barrie.
Our show in Peterborough was at The Red Dog Tavern. Seven people were there and I got a t-shirt of the bar for my brother. That is all I remember.

Our big showcase was in Toronto at Albert’s Hall on Bloor St. It was a blues club on the second floor above a college crowd drink to get drunk bar. We played there for a whole week. No one does that anymore.

I was warned to stay away from the bar downstairs. Did I really look that innocent? We met some interesting characters there like Henry the bouncer who pretended to be mean, but tolerated us because we were Prairie folk and kind of dull which is better than being assholes.

A few famous people came to our shows.


I think I slept with a bartender from Albert's Hall (Sorry mom. This is the "no boundaries" part of the blog). We watched a video of Pete Townshend. I don't remember the sex with him, but I remember leaving his apartment verrrrrry early the next morning and he gave me $20 for a cab, but he lived about 4,000 miles away from where the band was staying, so I ended up having to use all my food money for the next few days to get back to our hotel. He knew it was going to cost more than $20. Arse.

CBC taped us one night although there was some kind of technical foul up and the tape never saw the light of day. Probably a good thing.
Frankly, I think we were probably pretty horrible. But we were a different kind of horrible, so people were interested. We were an unknown to promoters so we didn't get a rider that I can recall, and we often had to fight to get what we were contractually entitled to.

Our next stop was Guelph, Ontario where we played the Albion Hotel, a club frequented by hipster university kids and where war vets lived in squalor.

The rooms we stayed in at the hotel became (and still are) the standard by which we measure levels of horrific accommodations. We actually found it to be hilarious it was so awful.  The mattress on my bed was about 3 inches thick and made up mostly of dust and old man skin flakes.

Our floor mates, old men with mental illness and hygiene issues, would shave, wash their dishes and underwear in the same sink. It was evident. We didn't bathe or shower there. The carpeting in the hallway was sticky, like almost dried tar. It smelled like sweat and Klik.

The campus was nice, though. We played a lunch hour show there. Here's Brad with a nice Guelphian tree. 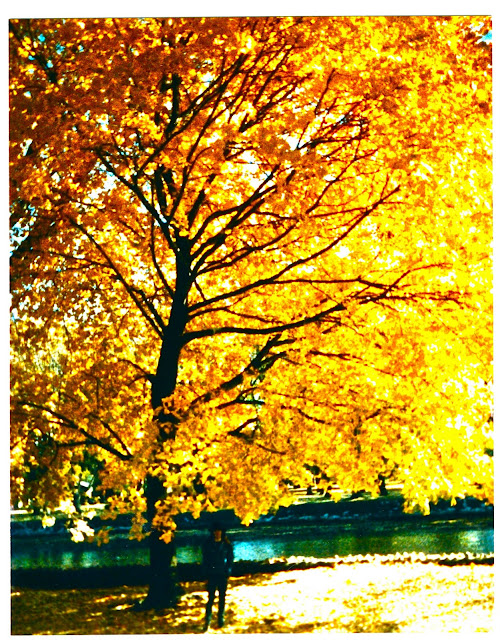 When we came back to Winnipeg after almost a month away, we were welcomed home like heroes. It was pretty great. Folks were rooting for us then - wanted us to make it big, I guess.

I also learned that I liked waking up in my own bed best. That having diarrhea in Barrie is not fun. And that I will NEVER EVER sleep with a bartender again, unless I get adequate cab fare up front.

Email ThisBlogThis!Share to TwitterShare to FacebookShare to Pinterest
Labels: 1989, Albion Hotel, diarrhea, famous people I have met., the band, touring