I am a big fan of Facebook. it provides me with the kind of relationships that I seem to be best at: superficial and not in situ. I’ve met some interesting people through Facebook and have reconnected with old friends I haven’t seen in 20 or 30 years.

The fact that people remember friends and schoolmates from 30 years ago is a testament to how important those early junior and senior high school friendships are, and how the friends we make then can end up being the friends we have for life. Facebook has made this more possible, and for some people, more comfortable. I mean, I am ok with being a Facebook friend with some people from my school days who I would not necessarily want to go for a coffee with. “Yes, I will be your Facebook friend, but if I recall correctly, the last time you saw me you called me ‘Ellen the Elephant’ so I doubt very much I am going to be writing “LOL” on your cute status updates about your children’s antics. And no, I won’t post your maudlin statement about giving a crap about some disease or another for one hour, because you say that most people won’t, in your attempt to make me feel guilty and that I should rise above the hard hearted insensitive masses and have MY status update be a beacon of awareness for scabies, lock jaw or whatever issues you have. But super to hear from you again, really!”. They know who they are. Jerks.
Annnnyhooooo...
So I recently reconnected with a friend I had in Junior High. A few months ago I wrote a little piece on how I was bullied/shunned for a full year in grade 8 and that I only had a couple friends. One of them was Nancy. 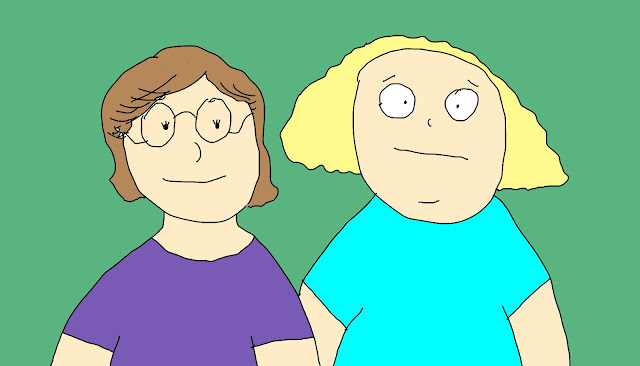 I’ve looked for Nancy on Facebook periodically just looking - not obsessive or stalkingly or anything. No. I didn’t know her married name so I was never able to hunt track her down. My mom sent me a newspaper clipping about an art show she had put on in a local gallery. She had been a talented painter when she was 14 and I was glad to see that she had kept up with her gift. I remember she did a painting of some train tracks that was pretty cool (we took an art class together. I think I painted a magical wizard castle that would have been at home on regretsy.com and a washed out blob of brown paint that my mother had framed in an attempt to bolster my saggy ego).

So I sent a friend request and was delighted that she accepted. But I haven’t been too aggressive. I was luring her. Like a magical unicorn that you come across in a secluded wood.  Just like that, actually. 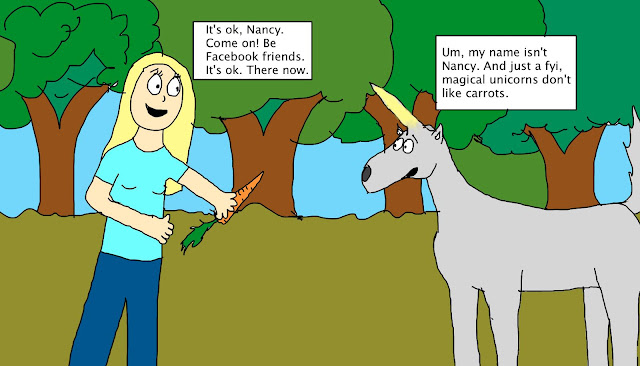 I had seen Nancy maybe 2 or 3 times since I was about 20. Once I ran into her in a mall, and the other time, Brian and I were at the Musee d’Orsay in Paris

and I hear this voice “Ellen?”. Yes. It’s Nancy. We had a brief exchange of pleasantries in which I probably looked something like this: 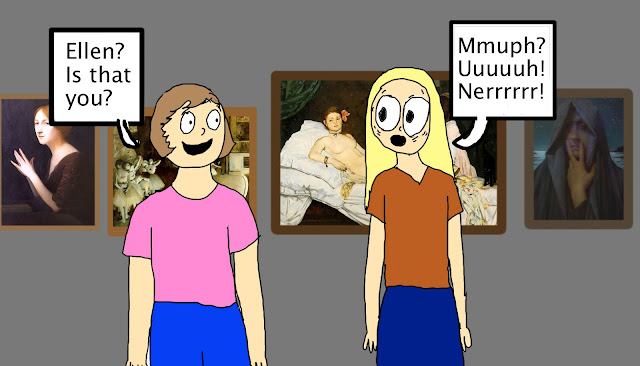 And which, in fact, I did look like this:

Here is the reason.
Since I was in my early 20’s, several times in a month, I have had a dream in which Nancy appears. I am 45. That’s a lot of months and a lot of dreams. It’s at the point now where if Nancy appears, I know I am dreaming and then I try really really hard to think about Keanu Reeves. I’ve had dreams in which I tell Nancy to pinch me to prove to me that I’m not dreaming. I’ve had dreams in which I meet up with Nancy and I tell her about all the Nancy dreams I’ve had over the past 25 years. And that is not awkward or weird or anything in any way whatsoever. But then I wake up and feel surreal and unsure if I need to get up really quick to get to school to take my history test that I haven’t studied for or gone to any classes for in 3 months. You know?
I had to ask Brian the next day if it had really happened, that I’d seen Nancy at the museum. He assured me that we did. Could I trust him? Was he gaslighting me?


I was close friends with Nancy for only a few years in Jr. High school, but they were clearly important and impactful ones. Nancy and I had a lot in common. Both in the top .0000000001 percentile for height. Both a little on the big side, and both of us had skin issues. We both got similar grades and had similar interests in art and music and movies. We had very different taste in boys, which was good, because I think we were both a little competitive with each other - and I had no right to be - I was lucky to have a damned friend at all.

We went to school dances and she danced to Aerosmith with me (who danced to Aerosmith at Jr High dances in 1980?) even though I was dancing like I was being tazered. She shielded me from the taunts of the evil bitchy girls. We both played tenor sax in band and had to march with them (worst marching instrument ever, outside of the sousaphone, say). She took me on a trip to Fargo where I bought cowboy boots. We went to their family’s cabin and we went on their sailboat and got caught in an offshore breeze, but she got us back to land, somehow. (I have never liked sailboats since- boats in general kinda freak me out). She had a dog named Daisy who totally hated me and tried to bite me on many occasions.
Eventually, things got better for me at school.

I lost some weight and joined some school activities and generally started feeling better about myself. By the time we graduated from grade 9 and prepared to move over to the high school, I was a much more confident kid (still not terribly confident, but when you’re at the bottom, there’s nowhere to go but up, right?).
Nancy and I kind of grew apart after that. I joined drama club. She opted out of band and focused on art. I made some new friends and so did she.
So Nancy, if you are reading this, you were a good friend to me and even though we grew apart in high school, I never forgot that you were one of the only people who stood by me when others were acting like walking shit sticks. Thanks for that. And thanks for dancing with me when they played Aerosmith at the dance  even though no one else was on the dance floor and I was dancing like no one was watching but people totally  were and I looked totally totally awful. 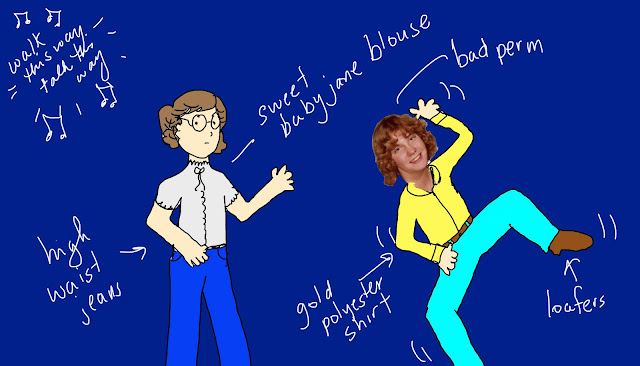 I’ll see you in my totally surreal dreams, no doubt. That was you at the d’Orsay, right?
Right?
Posted by Elpoo at 08:00